DARIEN, Ga. - You're driving through a Georgia town or county, glance in your rear view mirror and see something that's going to cost you big time. Blue lights.

You broke the law. But did that city or county do something equally troubling? Are they relying too much on ticket money to keep their budget in the black? 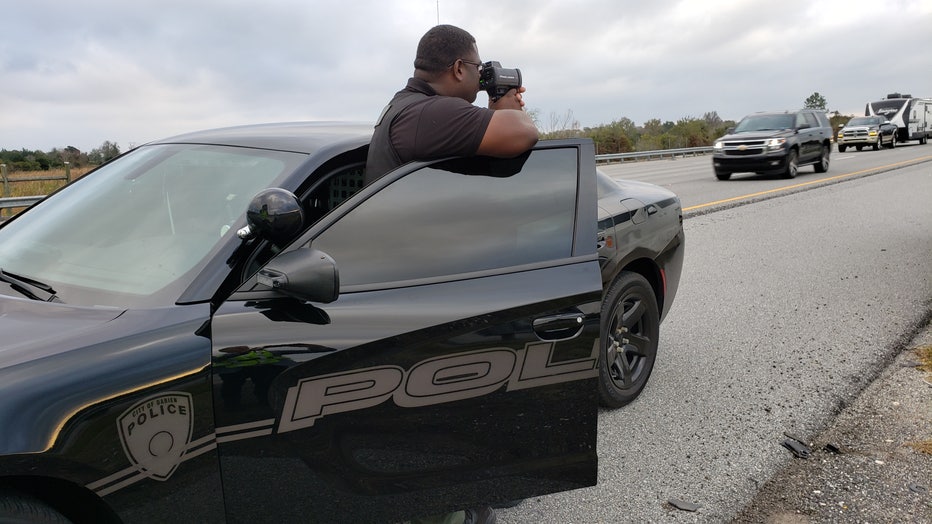 The historic coastal GA town of Darien relies on tickets to fund nearly half its budget.

In 2016, lawmakers approved legislation aimed at reducing the chance of communities running a speed trap. It limits speeding ticket revenue to 35 percent of the law enforcement budget. Any ticket for speeding over 20 miles above the speed limit is exempt. But go over that 35 percent limit and the police agency can lose its permit to run radar or laser.

Few do. But critics say that law has done little to curb our state's dependence on fines and fees.

"Georgia is sort of one of the ground zeroes for places where municipalities are very reliant on fines and fees for revenue," observed Joanna Weiss, co-director of the Fines and Fees Justice Center in New York City. The non-profit is dedicated to reducing the amount of ticket money US cities rely on to balance their budgets.

SEE THE FULL LIST OF BIG TICKET TOWNS IN GEORGIA

She says most small cities get around two percent of their revenues from fines, fees and forfeitures.

But a nationwide study by the online magazine Governing.com 2019 found nearly 100 Georgia cities relying on ticket money to fund at least 10 percent of their annual revenues. Places like Jonesboro (35%), Pine Lake (22%) and Stone Mountain (22%).

Darien is even higher. The coastal town was founded in 1736, the second oldest planned city in Georgia. It currently relies on ticket money from all violations to cover 46 percent of its revenues. 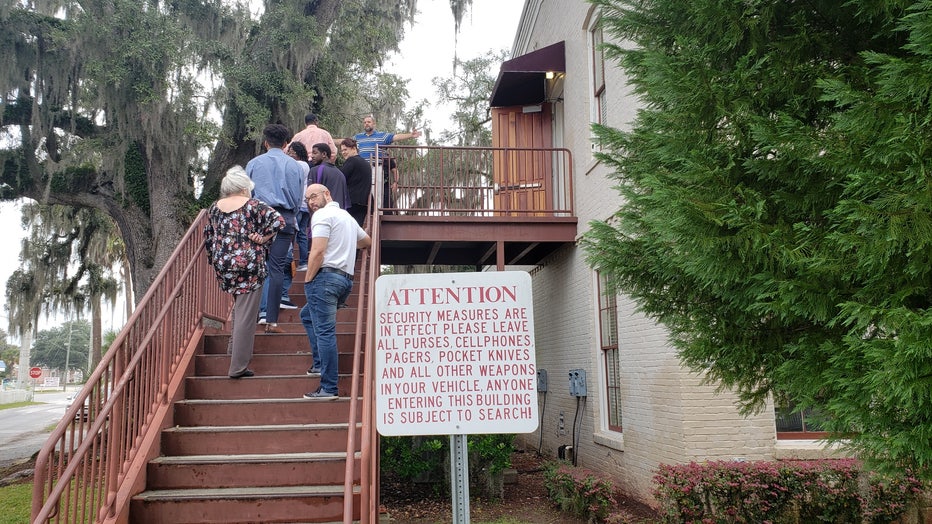 People line up for court day in Darien. Most of them don't live in the city.

"I think the basic insinuation is that we're doing something wrong," complained Darien city manager Tim Sweezey. "And that is simply not the case."

The fishing in Darien is legendary. On one side they haul in shrimp from the Atlantic Ocean. On the other, they haul in super-speeders from Interstate 95.

"If you was fishing, I'd say any stretch of 95 is a good fishing hole," admitted Darien police lieutenant Anthony Brown.

A four-mile stretch of I-95 is inside the Darien city limits, even though the main part of town is a couple miles away. We watched Lt. Brown stand outside his police cruiser, carefully aiming his Lidar laser gun back and forth in both directions. He routinely clocked drivers going at least 80 in the 70 miles per hour zone. He won't pull anyone over unless they're going 85. But for this seasoned cop, it really is like shooting fish in a barrel.

Lt. Brown's official mission for this town of nearly 2000 people: public safety. But some see something far more troubling in a speeding ticket.

"I think the city should dwell in the city and take care of problems that arise in the city and not be out on the Interstate," complained Joseph Howle from Hartsville, SC. He agreed not to fight his speeding ticket in exchange for a fine reduction. It still cost him $248 cash to put Darien in his rear view mirror. 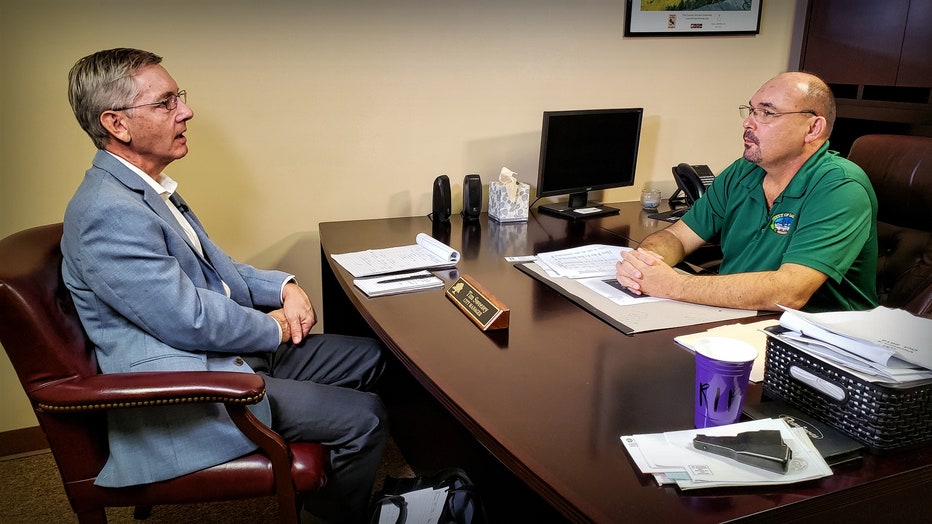 Darien has an annual budget of $4.1 million. In one year, they collected about $1.9 million dollars in fines and fees.

"If we're relying on fines and fees to raise revenue for a city, that means in order to keep the budget up we need there to be more crime," pointed out Weiss from the Fines and Fees Justice Center. "That's not sustainable."

Darien city leaders maintained they're doing nothing wrong. So they invited the FOX 5 I-Team to come see how it works. We sat through a morning court docket, drivers showing up to plead their case to judge Jean Bolin, the congenial part-time head of municipal court.

If they pled guilty or no contest, they could get their ticket reduced to going 84 in a 70, avoiding an extra $200 superspeeder fine and any points on their record.

But no one we talked to felt like they were getting a great deal.

Most of the people in court did not live in Darien.

We asked city manager Sweezey how writing so many speeding tickets on I-95 was keeping the people in Darien safe.

"Well, you never know who's out there," he said. "We just had a car accident at Exit 49 and that was a fatality."

Do your citizens routinely use I-95 to get around?

"I'm not quite sure where everybody goes," he said.

We did see Darien police also patrolling in the city proper, writing tickets there, too.

But when a small city relies heavily on ticket money, there's another worry these days. And it has a name: Ferguson. 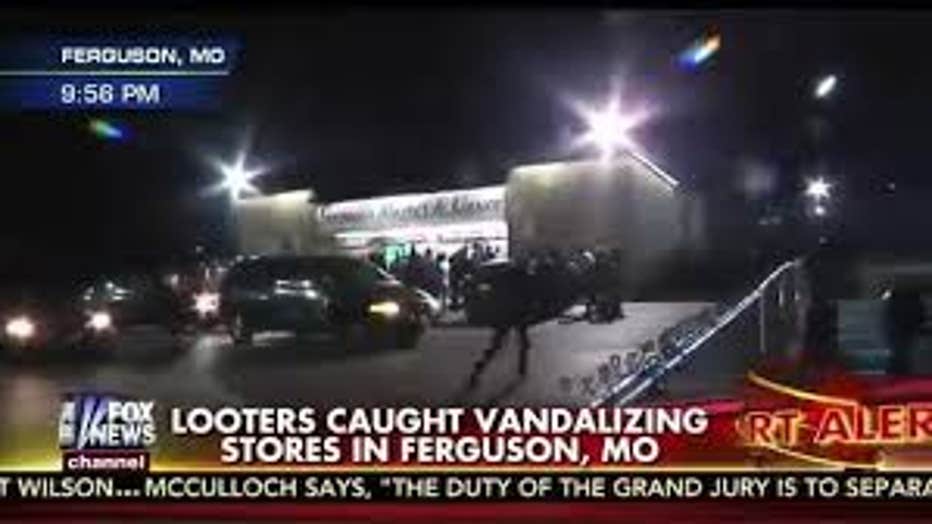 All government leaders around the country know what happened in Ferguson, Missouri in 2014. A white police officer fatally shot a black suspect, sparking days of riots and looting. A Department of Justice investigation later determined the city's reliance on fines to balance their budget created years of police mistrust in the community that ultimately boiled over after the shooting. In response, the state of Missouri now limits fines and fees to 20 percent of a city's revenues. If that same law applied in Georgia, 51 cities would exceed that number, including Darien.

"Are you suggesting there are communities in Georgia that are ripe for the same type of troubles that took place in Ferguson?" I asked Fines and Fees Justice Center's Weiss.

"I don't think our climate is anywhere near Ferguson," he insisted.

Could he imagine balancing his budget if you could only get 20 percent of his revenue from tickets?

"Well, I would have to," he admitted. It would mean cutting police services he says, and raising taxes on property owners here.

Still, he conceded Darien is considering alternative revenue sources. Because one day the fish may decide to seek friendlier waters.