A storm that tore through Covington on Oct. 10, 2020 left behind damage to the area's only homeless shelter.

COVINGTON, Ga. - Dozens of people staying at Newton County’s only homeless shelter had to be relocated on Saturday evening after a severe storm tore through the area, collapsing a portion of the building’s wall.

Shelter officials said there were about 40 people inside the structure at the time. Shelter director Clara Lett said it has been a long day.

“I know we will be needing help from the community and from those far away,” said Lett.

Cleanup at homeless shelter in Covington

Covington's only homeless shelter begins to clean up after a powerful storm damaged the building on Oct. 10, 2020.

Lett won’t know if it was a tornado that ripped through the town of Covington until the National Weather Service has a chance to perform a survey of the damage.

Among that damage is part of the roof that was destroyed and the front wall fell away exposing the lobby.

“They do not have other shelters here. We are the only shelter. They get three meals a day and they have their own sleeping area,” Lett said. 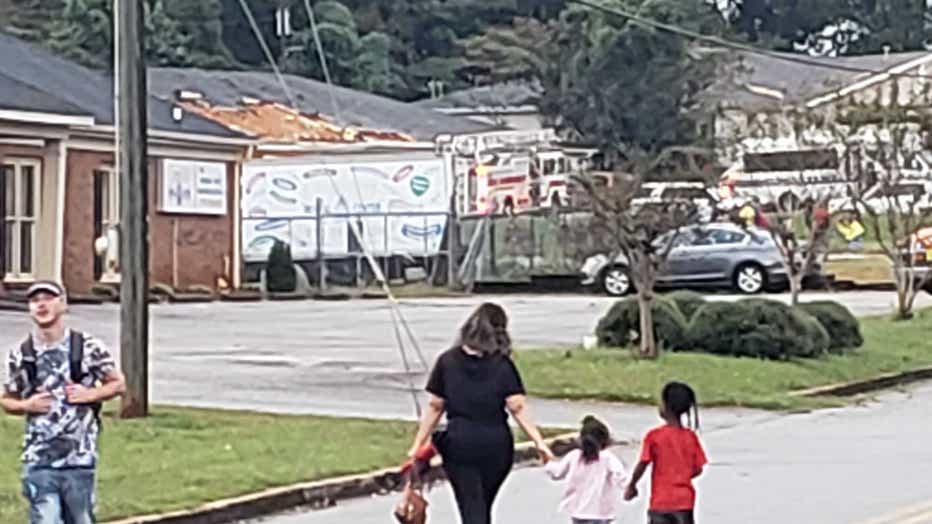 Severe storms damage a homeless shelter in Covington on Oct. 10, 2020.

She said the shelter holds 84 beds but 42 people were inside when the storm came through.

Those who were staying there will be taken to a nearby gym.

“Until this building can be repaired or rebuilt. We don’t know which one just yet,” Lett said.

“I’m originally from Savannah. We are used to hurricanes but not tornadoes. This is totally different,” said Shalonda Brown

Just a street over from the shelter, limbs, shingles, and uprooted trees remain as evidence of just how powerful Saturday’s storm was.

“When you see the roots and the dirt then you know it was something serious,” said Dorian Smith.

“It didn’t get dark. All you heard was a lot of wind and rain and the next thing was shingles falling everywhere,” said Brown.

A short distance away was even more cleanup.

“One of the members at my church who helps serve here was injured and he’s at Newton piedmont hospital,” said Lett.

Officials said at least two people were injured. One was a man volunteering at the shelter. The details as to the extent of their injuries were not immediately known.

“I do think it was a tornado. The force of the wind and shingles flying and there was a board that flew off this person's roof right here,” Lett said.

No word on when the National Weather Service will conduct a survey.