Two aircrew members have a lot to be thankful after a unique wedding.

MARIETTA, Ga. - Finding the perfect wedding venue can be a stressful endeavor, but for captain Will Jones and first lieutenant Lyndsy Harrison, the right place…was right over their heads.

“It was almost a joke.  And then, she was very receptive to it,” says Jones.  Adds Harrison, “I was like, ‘I think that would be really neat!’”

Capt. Jones and 1st Lt. Harrison are both aircrew members from the 700th Airlift Squadron at Dobbins Air Reserve Base in Marietta.  On November 10th, they became husband and wife — reciting their vows from the back of a C-130.

“We were already both scheduled to fly that day.  And from then, it was just making sure that our leadership, the wing commander, the group commander, our squadron commander was okay with it,” says Jones.  “Because we both love this job, it just kind of feels like home in the back of the airplane.”

Before saying “I Do,” the couple took part in one final training mission together; a bittersweet moment, as Air Force regulations restrict married couples from flying in the same plane.

“We originally toyed with the idea of getting married in flight,” says Jones.  “And that would have been fine taking off together, but once we’re married, now we’re spouses and we’re not legally allowed to be on the same aircraft.” 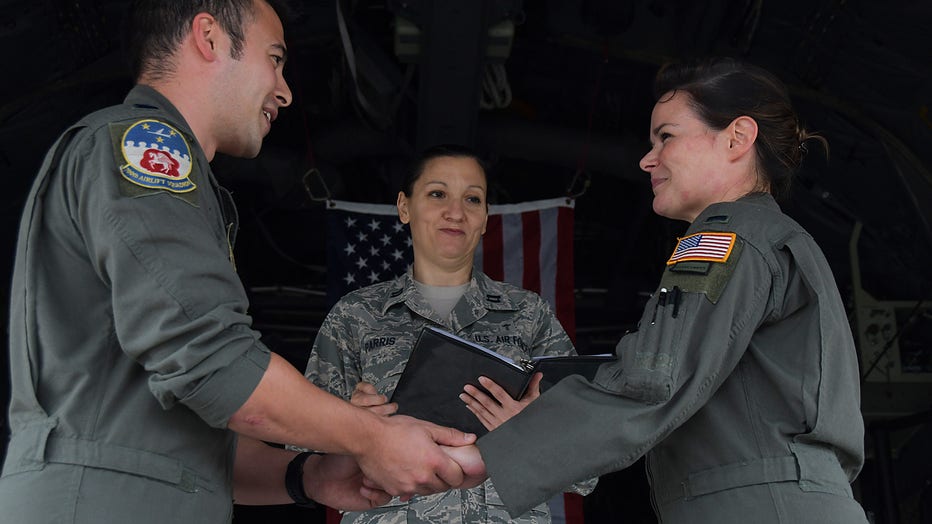 Adds Harrison, “When we were taxiing and we were able to see the people who were there waving at us, that’s when it hit me that, you know, he is a great pilot.  And I will never get to fly with him again.”

Instead, they’ll embark on a different kind of journey together — one that also includes Harrison’s two teenage sons.

“They have been on board with everything from the beginning,” says Harrison.  “When he was going to propose to me at my graduation, they knew.  And I’m like, ‘I’m your mom!  You couldn’t have told me?’ And they’re like, ‘No!’”

The pilot and navigator say they’ll hold off on a honeymoon for now, and are planning a low-key Thanksgiving at home.  To see pictures and video from the wedding, click the video player in this article.