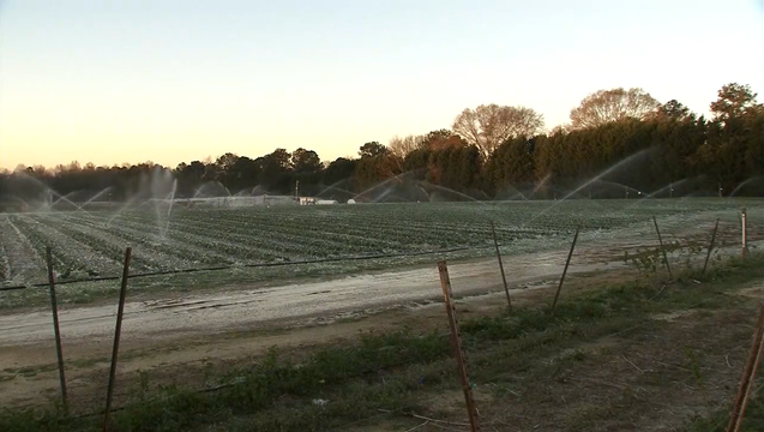 COLUMBIA, S.C. (AP) - Last week's deep freeze in the Southeast appears to have nearly wiped out Georgia's blueberries and South Carolina's peaches and seriously damaged a number of other crops like strawberries and apples.

In South Carolina, 85 percent of the state's peach crop is gone while the small pink blooms remain on the trees, according to the South Carolina Department of Agriculture.

Between the two states, crop losses from the freeze could approach $1 billion, officials said.

Georgia might be the Peach State, but blueberries have recently passed peaches in value. Blueberries ripen faster in the warmer climate and can get into store quicker than traditional blueberry growing regions further north. But not this year.

"We saw blueberry fields that had the potential to be the biggest and best crop of Georgia's production history that you would now not be able to find enough blueberries that survived the cold to make one pie," Black said.

Temperatures dipped into the 20s both Wednesday and Thursday morning. While mid-March freezes aren't unusual in much of the Southeast, many crops were blooming up to three weeks early because of the unusually mild winter.

South Carolina is the second biggest peach producer in the United States behind only California. Foodies are especially drawn to the state's peaches, considering them the juiciest and highest quality in the nation.

Both states reported some damage to strawberries. North Carolina farmers said apples blooming earlier than usual were hurt by the freeze.

Officials said it is the most damaging freeze for the Southeast since the 2007 Easter freeze in early April where a similar cold snap destroyed 90 percent of South Carolina's peaches and caused closed to $1 billion in crop damage across the region.