Cannon to be removed from Decatur Square

DeKalb County has voted to remove a monument to the Creek Indian War of 1836 from Decatur Square.

DEKALB COUNTY, Ga. - The DeKalb County Commission has unanimously voted to remove a monument to the Creek Indian War of 1836 from Decatur Square.

Tuesday, the group decided that the cannon, which has been on the square for over a century, will be moved to storage.

The vote came after months of work by activists, who argued the cannon was a Confederate symbol. The cannon was placed on the square in 1906 by the United Daughters of the Confederacy.

"The cannon being placed in the public square in a seat of power is telling a one-sided story," said Fonta High, the co-chair of the Beacon Hill Black Alliance for Human Rights.

The organization, along with other community members starting to bring their concerns to the commission last year.

According to the Muscogee Creek Nation website, between 1836 and 1837, the US army enforced the removal of more than 20,000 members of the nation from Georgia, Alabama, Florida, and South Carolina..

During a Dekalb County Commissioners board meeting last year, John Winterhawk, a member of the nation, said things like the cannon are reminders they are oppressed people.

However, some say it's a piece of history that is a reminder of the injustice that was endured.

Laura Cummings Bulgari is a member of the Atlanta Indigenous Peoples Association.

"It worries me to lose that visual of what atrocities really affected our people. I probably would have suggested building some sort of a memorial on top of it," she said. 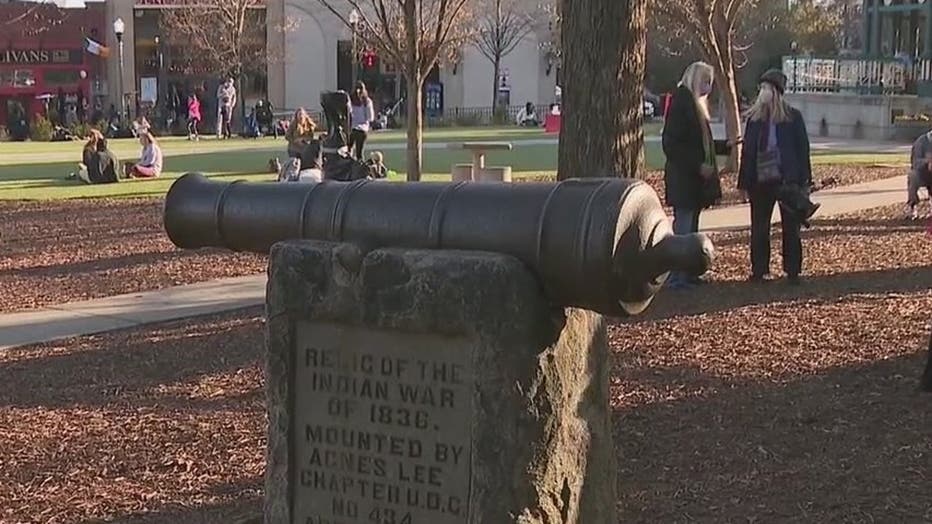 FOX 5 reached out to the United Daughters of the Confederacy but did not hear back.

The group has a statement on their website pertaining to statues and relics.

"The United Daughters of the Confederacy appreciates the feelings of citizens across the country currently being expressed concerning Confederate memorial statues and monuments that were erected by our members in decades past.

"We are grieved that certain hate groups have taken the Confederate flag and other symbols as their own. We are the descendants of Confederate soldiers, sailors, and patriots. Our members are the ones who have spent 126 years honoring their memory by various activities in the fields of education, history and charity, promoting patriotism and good citizenship. Our members are the ones who, like our statues, have stayed quietly in the background, never engaging in public controversy.

"The United Daughters of the Confederacy totally denounces any individual or group that promotes racial divisiveness or white supremacy. And we call on these people to cease using Confederate symbols for their abhorrent and reprehensible purposes.

"We are saddened that some people find anything connected with the Confederacy to be offensive. Our Confederate ancestors were and are Americans. We as an Organization do not sit in judgment of them nor do we impose the standards of the 19th century on Americans of the 21st century.

"It is our sincere wish that our great nation and its citizens will continue to let its fellow Americans, the descendants of Confederate soldiers, honor the memory of their ancestors. Indeed, we urge all Americans to honor their ancestors’ contributions to our country as well. This diversity is what makes our nation stronger.

"Join us in denouncing hate groups and affirming that Confederate memorial statues and monuments are part of our shared American history and should remain in place.

The cannon isn't the first time a monument connected to the Daughters of Confederacy has been removed in Decatur.

In June of 2020, crews removed a Confederate monument outside the historic DeKalb County Courthouse while a gathered crowd cheered.

A judge ordered the monument, which was erected in 1908, a public nuisance and ordered its removal.