"I never expected to have a house being flooded with water never," said Amanda McKinzin, the 911 dispatcher who took the call last week.

"She told me her mother was there and her two children were there, and water was flooding into the home," explained McKinzin. "I said, 'How deep is the water?' and she said, 'It's rising up to my ankles and getting deeper.'" 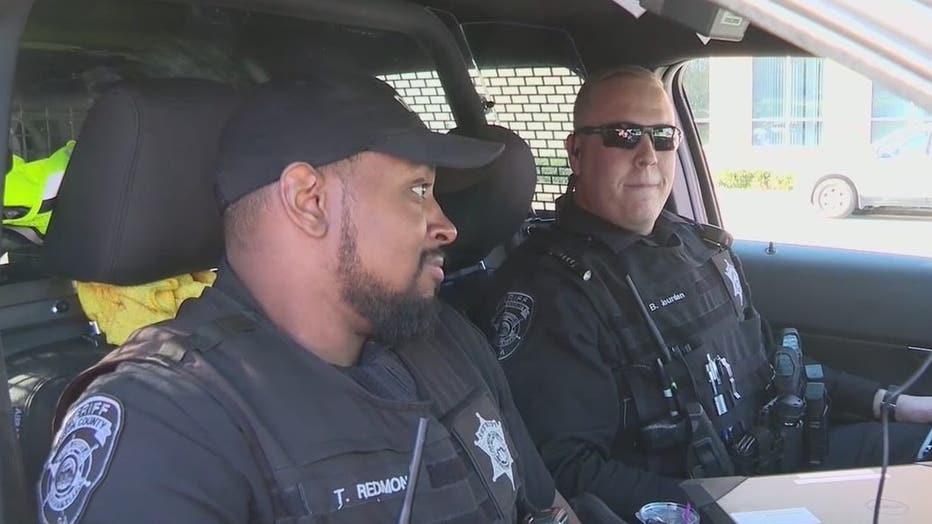 Deputies Talley Redmond and Brendan Jourdan helped save two adults and two children from a flooded home on March 26, 2021. (FOX 5)

Deputies Jourdan and Redmond were both working the night the call came in. Once they heard four people, including two young children were trapped in the flooded home, they rushed to the scene.

"I believe the call came in actually as she believed somebody was trying to break into the house," said Jourdan. "It turned into the house was actually rapidly filling with water coming underneath the door and through the walls."

When Redmond and Jourdan arrived on the scene, floodwaters were already blocking the driveway leading up to the home. That forced them to leave their patrol cars and wade through the water.

"Outside the residence was getting taller on the porch area. It was between our shins and our knees," described Jourdan. "We were trying to do it in a hurry, but also trying to keep them calm so there was no panic."

"They were fine. They were cracking jokes the whole time. We were keeping them calm, making sure they were not going to get wet," said Redmond.

The video has also gotten attention on social media. Jourdan and Redmond said it's a morale boost to know they have support coming in from the community.

"That positive feedback helps us a lot to wake up every day and get ready to come to work," said Jourdan.