MCDONOUGH, Ga. - McDonough police are on the lookout for a credit and debit card bandit who was recorded freely spending other people’s money.

Investigators said the cards were stolen from the men’s locker room at the local Gold’s Gym and that the man who spent the money didn’t steal them.

He said at both stores the man went on a spending spree with stolen credit and debit cards, spending several thousand dollars on high-end Apple electronics. The plastic money was stolen from men’s lockers at the McDonough Gold’s Gym earlier that day. The wallets were left behind.

“Once the suspect took the credit card and debit card out of their wallet they put the wallet back in the clothing. If their wallets gone immediately they’re going to know but if their wallets there they don’t find out that their credit card is missing,” said Detective Spangenberg.

He said fraud alerts shut down the stolen credit and debit cards. But since the man who spent the money was never seen on Gold’s Gym surveillance video investigators believe he has an accomplice.McDonough Police are trying to find other victims. For members of Golds Gym like Evan Williams, the locker room thefts by an unknown accomplice to this man are a clear warning to secure belongings.

“Inside the locker room it’s open, you have the opportunity to put your lock on the locker if you want to have your belongings secured, some people do not do that and shame on them for that,” said Williams. 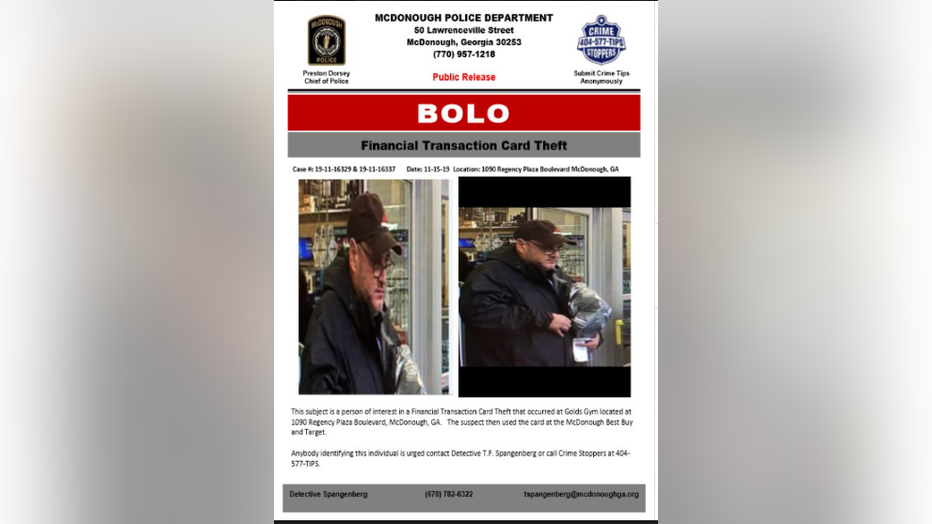 McDonough Police are asking anyone who may be a victim of the man recorded on surveillance and his unknown accomplice to give them a call.