With COVID-19 rising once again, there is now an antiviral medication that officials say can cut the risk of hospitalization by up to 90 percent if taken in the first three to five days of infection called Paxlovid. Laura McKelvey and Harriet Ribbons say that they were faced with an altered sense of taste while taking this medicine and it has not gone away.

ATLANTA - Laura McKelvey and Harriet Ribbons have been stuck in their Tucker home, recovering from COVID-19, for two weeks now.

"It has definitely been a rollercoaster," Harriet Ribbons says. 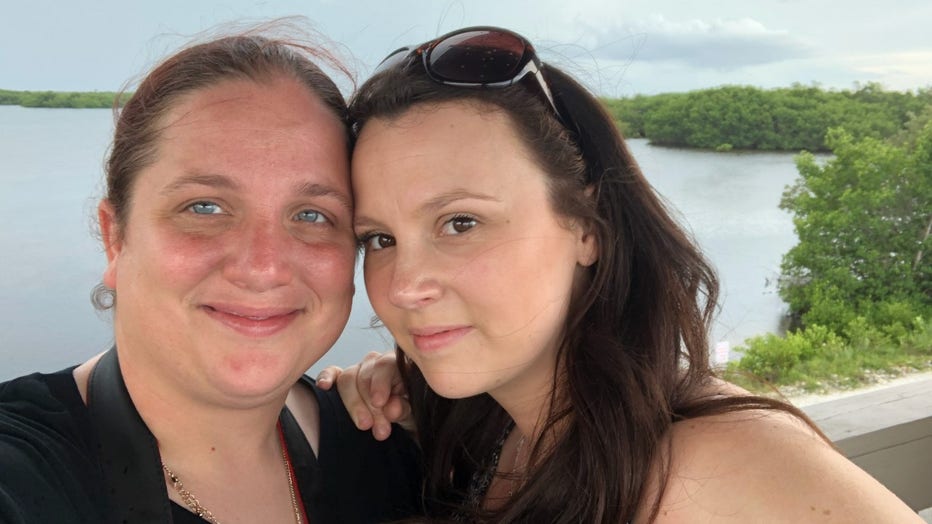 Laura McKelvey and Harriet Ribbons both took Paxlovid after contracting COVID-19. Both were caught off guard by a little-known side effect: a really unpleasant taste. (Laura McKelvey)

The couple, who both work for PAWS Atlanta, have been through a revolving door of symptoms: cough, fever, fatigue, nausea and vomiting, sore throat.

"One day you wake up, and you have a cough, the next day you have a sore throat," Ribbons says.  "Then, your sore throat goes away, and your nauseous."

"The sore throat, as weird as that sounds, was brutal," Laura McKelvey says.  "It was hard to swallow, hard to eat."

Both vaccinated and boosted, they each have a health issue that could raise their risk of becoming severely ill from this virus, and that seemed to be where things were headed.

So, after testing positive on both at-home and PCR tests, they called their doctor.

"The doctor basically said, 'There is a treatment now, take this, you'll feel better in no time," Laura McKelvey says.

Their doctor prescribed Paxlovid, an antiviral made by Pfizer that can cut the risk of hospitalization by up to 90% if taken in the first 3-5 days of infection.

"My pharmacist, when I picked up mine, did explain to me, I'd have to do 5 days and that there would be a lot of pills, and things like that," McKelvey says.  "I'd also done a lot of Googling.  So, I knew it was going to make me a little nauseous, a little dizzy."

"Being honest, I didn't really Google the side effects," Ribbons admits.

U.S. health officials want Americans to not let their guard down as COVID-19 cases are rising once again. Health officials say that a lot of cases are not being accounted for as a result of at-home tests not being recorded. Hear more with Beth Galvin from FOX 5 Atlanta's Medical Team.

And, soon after she took the first pill, she says, she noticed the taste.

"I can only describe it as, when you have run something through the dishwasher, and maybe the soap hasn't gotten quite off the item," Ribbons says.  'You're like, 'Oh, maybe it's my glass, or maybe something didn't quite rinse out.'  Well,  I think 5 glassed down, I realized it wasn't really the glass, it was actually going to be my life for the next 5 days."

For Laura McKelvey, the taste was bitter, like the aftertaste you get when you do not swallow a pill correctly.

There is even a nickname for this: "Paxlovid mouth."

On Pfizer's Paxlovid website, an "altered sense of taste" is listed as a possible side effect.

In a written statement to FOX 5, Pfizer Pharmaceuticals wrote, "PAXLOVID is a combination of nirmatrelvir and ritonavir tablets."

The company says nirmatrelvir and ritonavir are bitter substances, which may contribute to the reports of taste-related side effects.

The company writes, "Given the mostly mild nature of the event and the fact that very few participants discontinued the study as a result, the adverse reaction doesn’t meet criteria for inclusion as a warning. "

McKelvey and Ribbons stayed with the medication for all 5 days, taking all of the pills, because they felt like they were helping, at least somewhat.

"If we hadn't taken it, maybe we would have gotten better anyway," McKelvey says.  "But, it felt like we weren't getting better before that.  So, even though it wasn't a dream come true, it was still, I felt like, a really good thing.  Progress."

When they finished the medication, they say, the soapy, metallic taste disappeared within a few hours.

So, would they take Paxlovid again, knowing what they know?

Harriet Ribbons says she is a little more on the fence.

"Brutal honesty, I probably would do it again," she says.  "I think part of the reason I struggled was that I didn't do as much of the research before we had begun, and that is absolutely 100% on me."