Seven officers, one big dinner tab, and an even bigger blessing from a total stranger in Conyers has police officers offering a big thank you.

CONYERS, Ga. - It's the kind of unexpected gesture that really brightens your day--and in this case, the gesture brightened the day of several police officers and even a few other folks who had no idea what was coming.

"I've told my friends about this, told my family about this. What she did really means a lot," Officer Brandon DeCosse told Fox 5's Portia Bruner Tuesday.

The Conyers Police Officer said he and his fellow officers enjoyed a hearty dinner at Cracker Barrel on March 5. All seven decided to take a break together after a long day of training--not knowing a Cracker Barrel customer would step up to cover their entire meal with a wad of cash tucked inside a note that read," Thanks for letting us treat you to dinner. We appreciate you."

"There was $120 inside that note and we were able to pay our tab and bless the table behind and the person waiting on our table," said Officer DeCosse. 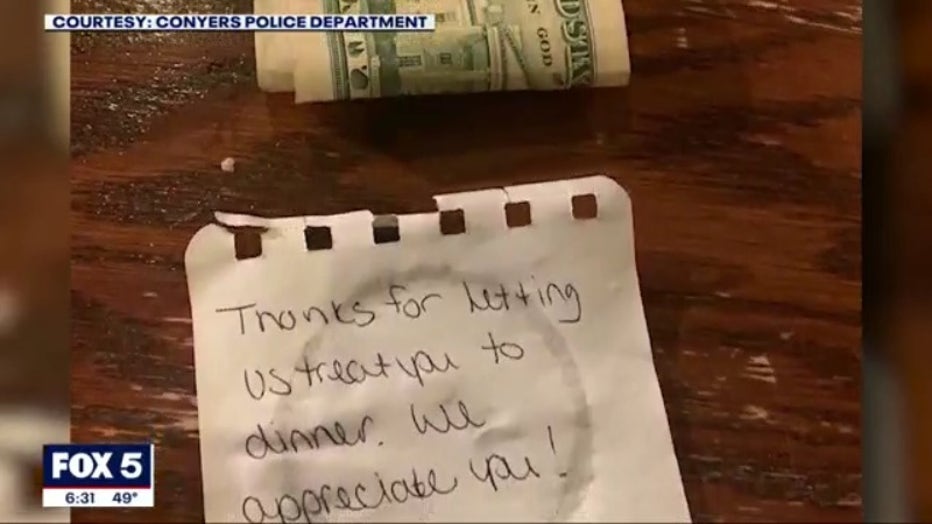 DeCosse said the woman left the note next to one of the officer's plates, then slipped away with a young boy wearing head gear outfitted cat ears. DeCosse, who works with a specially trained K-9 officer, said he and his colleagues were stunned and tried to find the woman and child in the restaurant parking lot moments after she left the note.

"I was trying to find the child so I could give him a police badge sticker, but by that point, they were already gone," said DeCosse, who joined the police department after working as a Rockdale County  Sheriff's Deputy.

The young officer said he and his colleagues appreciate the woman's generosity and humility, but he wishes they could have shared just one sentiment with her and the young boy who was with her that evening.

"Nowadays, we really don't get much appreciation, so when something like that happens, it's a blessing. I thought about it for days afterwards and it reminds us that the community does support us," said the officer, who grew up in Conyers. "Especially now during the pandemic with everybody struggling, it was really selfless for her to help out us and it spoke a lot of her character," said DeCossse.