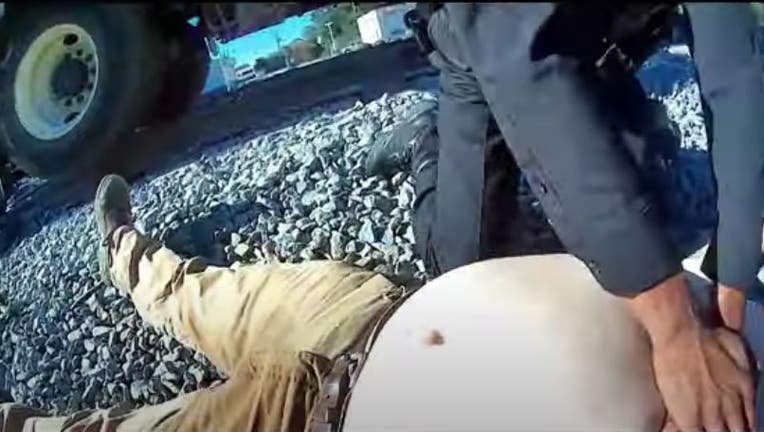 CONYERS, Ga. - Two Conyers police officers are being praised for their quick thinking that saved the life of a man who collapsed while working.

The Conyers Police Department says on Oct. 19, they received a 911 call about a man suffering a medical emergency while working on the CSX Railway.

"I knew exactly where that location was. It wasn't that far from me at all," Officer Huf said. The two dropped what they were doing and hurried to the scene.

Body camera footage shows Huf and Wright getting to the scene to find the man on the ground by the tracks with his coworker trying to do CPR.

The coworker tells the officers that he believes the man has had a heart attack and he's not breathing.

"Officer Wright and I approached the patient. He started CPR at my request. I cut the patient's shirt off, put the defibrillator on and it was able to give him a shock," Officer Huf said.

As luck would have it, Officer Huf is a certified paramedic. He said that shock likely saved the man's life.

"One of the most important things is early defibrillation. I believe we had that first shock in just over two minutes," he said.

The man's sister identified him as Johnathan Wade Bryant.

Thelma Bryant tells FOX 5 brother didn't remember what had happened when he woke up in the hospital.

"He had 100 percent blockage and it's called a widow maker's heart attack. Only 12 percent of people survive it," Bryant said.

She said he spent a week in the hospital and is now at home.

"I'm sure Wade would love to meet them as well. It's not every day you get to meet the person who saved your life," Bryant said.