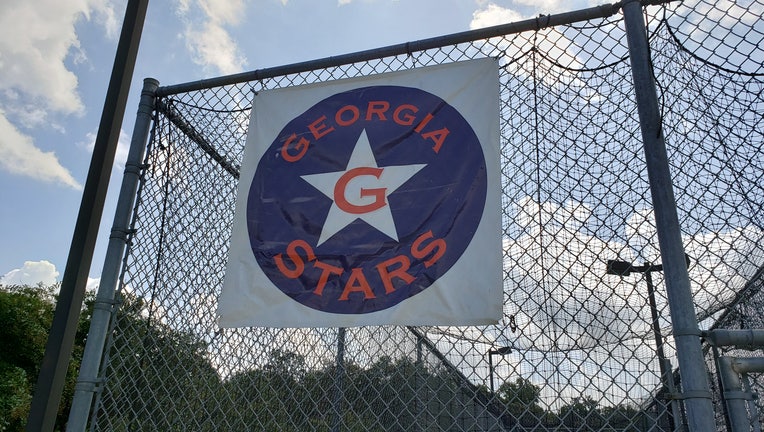 Georgia Stars is a charity whose stated purpose is to help "underprivileged children play travel baseball." The organization could not provide us proof it is carrying out that mission.

DULUTH, Ga. - Parents complain a Norcross baseball academy lied about the experience of their coaches and wrongly guaranteed they could claim thousands of dollars in fees on their taxes in a pitch to convince their kids to play there.

The Georgia Stars Baseball Academy is organized as a charity. Its mission: “to help underprivileged children play travel baseball and earn college scholarships.”

But many parents pay as much as $3800 to enroll their son or daughter in the 10-month program.

And an undercover FOX 5 I-Team investigation revealed why some parents are so upset with the charity president and head coach Edward Waters. 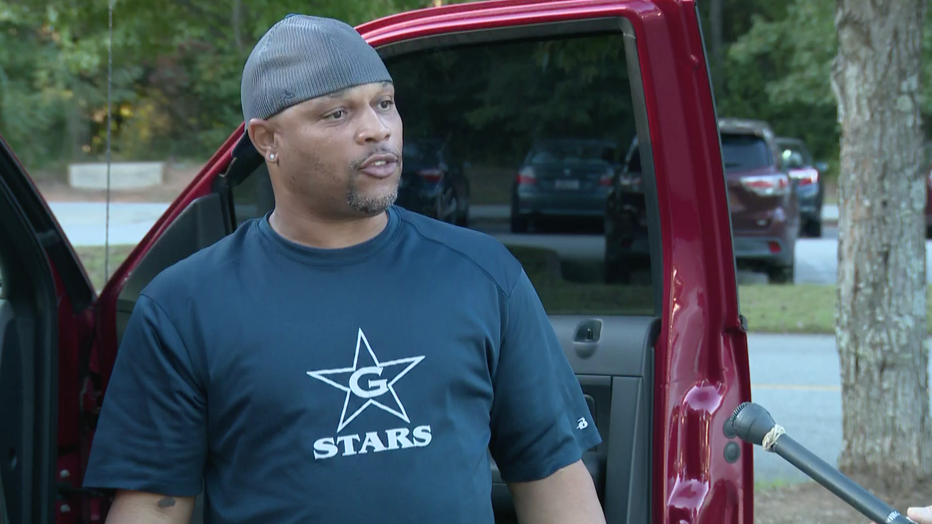 Edward Waters is the president and founder of Georgia Stars. For years, he has wrongly told parents they could deduct thousands of dollars in player fees off their taxes.

“I don’t want any other parent to go through the same experience without the truth,” complained Sheryl Morris.

Last year Sheryl and husband Jeff signed up their son Riley to play for a 12-and-under team at Georgia Stars. The training facility is in Norcross. Practice is held weekly at Shorty Howell Park in Duluth.

One of the selling points is the organization’s charitable status. Parents received letters from Waters telling them all those thousands of dollars paid each year so their child could play travel baseball were considered “donations.”

“He said it would be 100 percent tax-deductible,” remembered Sheryl.

But if parents are deducting those fees from their taxes, experts say they could be in big trouble.

“The question is what you’re getting in return,” explained Usha Rackliffe. She teaches tax law at Emory University’s Goizueta Business School.

“Is it truly a donation?” she said. “Or are you really paying for a service?”

That means over the years, hundreds of Georgia Stars Baseball Academy parents may have claimed a deduction they didn’t deserve.

“If I were one of the parents and I was getting a letter like that I probably would not take a charitable deduction under those circumstances,” warned Rackliffe.

The Morris family did. 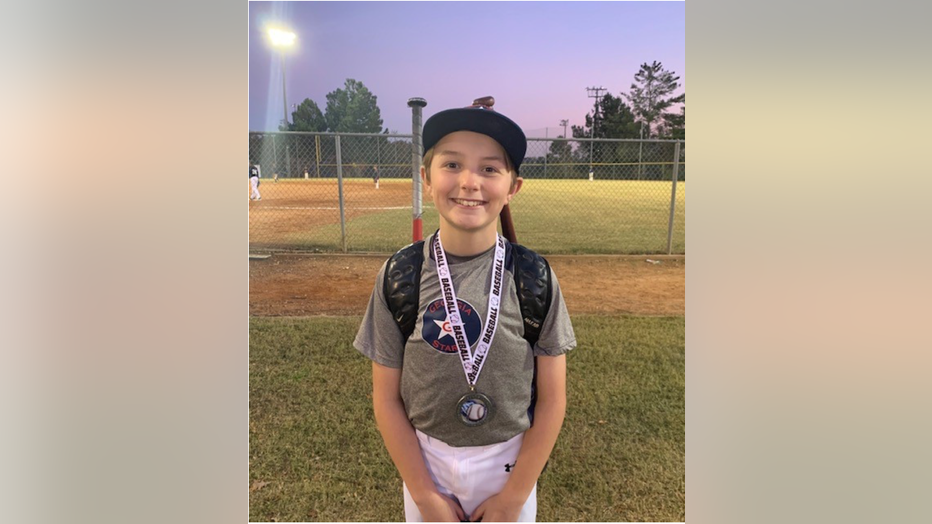 Sheryl and Jeff Morris paid $3350 for son Riley to play for the Georgia Stars. The couple pulled him out when questions surfaced about the head coach and his claim of professional baseball experience. (Family photo)

When a FOX 5 I-Team producer visited as a prospective parent, Waters gave her the same questionable tax advice.

“We’re a 501c3 non-profit organization, been like that for 12 years, so when people pay their fees, it’s tax-deductible,” he explained.

When we asked Waters later where he got the idea that player fees were tax deductible, he said it came from “attorneys.” He would not specify who.

We did find a lawsuit filed by Coach Waters against a family that said, according to the court file, they were “not able to pay” a past due amount of $1000 because they “work on our own and the work is very slow.”

The family eventually agreed to make payments, even though they had taken their son out of the program. 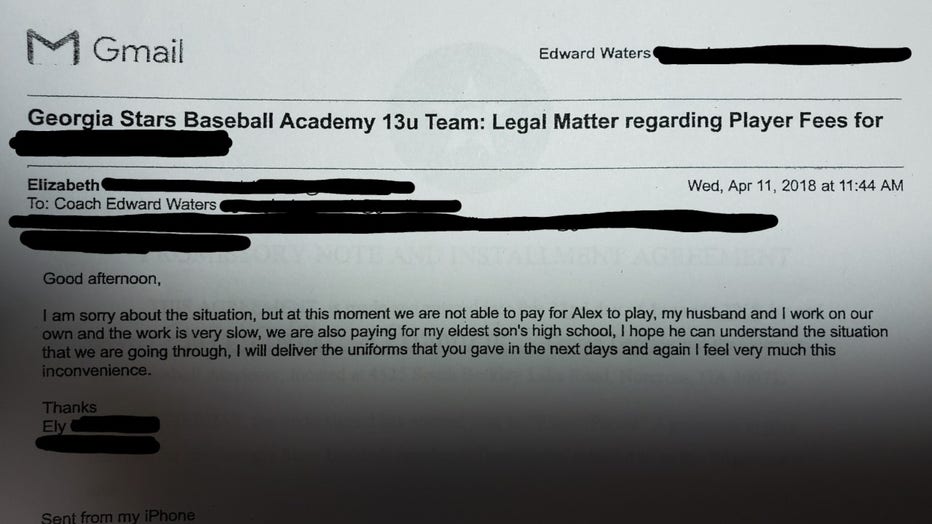 Georgia Stars sued a parent who emailed that they could no longer pay $1000 owed. Even though they had taken their son out of the program, Georgia Stars insisted they still make payments.

Board chairman Alan Robinson said seven “underprivileged” children are currently getting free or discounted player fees at Georgia Stars. But he provided the FOX 5 I-Team no way of confirming that number.

Coach Waters does not draw a salary, but he does charge parents hundreds of dollars on the side for optional private hitting lessons.

On their website and in person, parents are told all of the Georgia Stars coaches played either in college or the major leagues.

But that’s also not true.

Not a single retired major league player is on the staff. Some spent time in the minors or in college programs, but Robinson admitted five of the coaches only played high school baseball.

Then there’s the question of how much professional baseball experience Waters has himself. 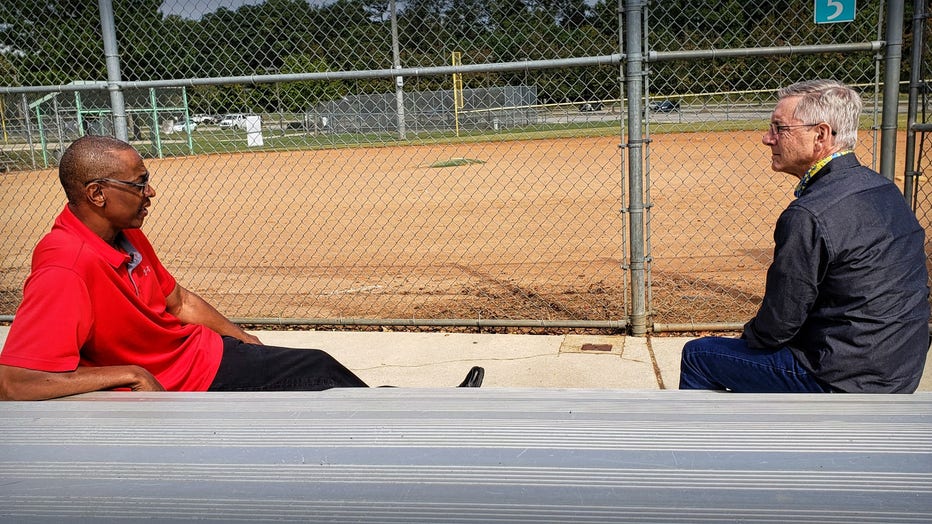 Gerald Harris said he could have taken his son to other travel baseball teams, but he chose Georgia Stars because of the supposed tax advantages and major league experience of the coaches. None of that turned out to be true.

Seven parents told the FOX 5 I-Team Waters assured them he played in the Major Leagues either with the Chicago Cubs or Texas Rangers. Sometimes both.

“He said he hit 289 home runs in his time being there,” said Gerald Harris, another parent.

Not to mention two Gold Gloves. Parents said Waters told them he was a slick MLB defender.

And a current MLB scout.

Robyn King Richards considered signing up her son for the Georgia Stars. She said she talked to Waters by phone who apologized for not returning her call sooner.

“He was just getting back from a scouting trip for the Pirates,” she remembered him saying.

When she checked with the Pirates and learned that wasn’t true, she decided to take her son to another program.

“Travel baseball is a very competitive sport,” she said. “Parents make decisions to go to them based on the credentials of the people who are running it.”

Waters denied telling any parent he played or scouted in the majors. During our undercover visit — shortly after Richards and others had raised questions — Waters told our producer this:

“Played back and forth… a little pro ball in Venezuela and Puerto Rico.”

Again, coach Waters could provide us no proof he played professional baseball anywhere.

“He sold me a dream if I come over there,” said Harris. “And that’s what brought me over there.”

But Waters insisted to us the dream was real.

“It is true,” he said. “Everything’s true. Everything in my program is true.”

An answer that’s clearly not.