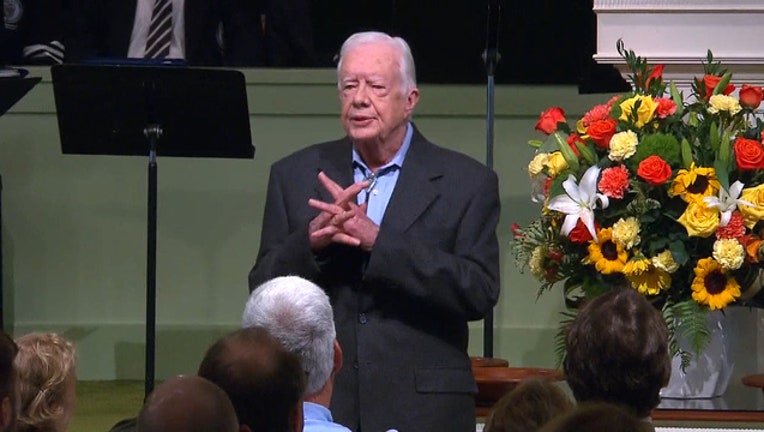 A church service is underway at the Maranatha Baptist Church in Plains, Georgia.  Former President Jimmy Carter and his  wife Rosalynn are in attendance.
After the service, President Carter will teach his regular Sunday School class.  This is the first class since President Carter announced he will be cutting back on his humanitarian work and other duties at the Carter Center as he goes through cancer treatment.
President Carter talked about his cancer diagnosis earlier this week.  He confirmed that the melanoma, which was first found in his liver has spread to several spots on his brain.  The President talked about the peace he feels because of "a life well-lived and a strong faith in God."
The President began treatment Wednesday with IV drugs, and radiation on Thursday.  He's being treated at Emory Hospital. Doctors say he'll get what's known as sterotactic radiation therapy, where a high does is given to the tumors, but spares the rest of the brain.
The President said he is looking for the best in challenging times ahead, and leaning on his faith. "Now I feel it's in the hands of God, who I worship, and I'll be prepared for anything that comes," says President Carter.
Throughout the week, people left cards and notes at the Carter Center.  Most simply saying they're praying for the 90 year old as he battles cancer.