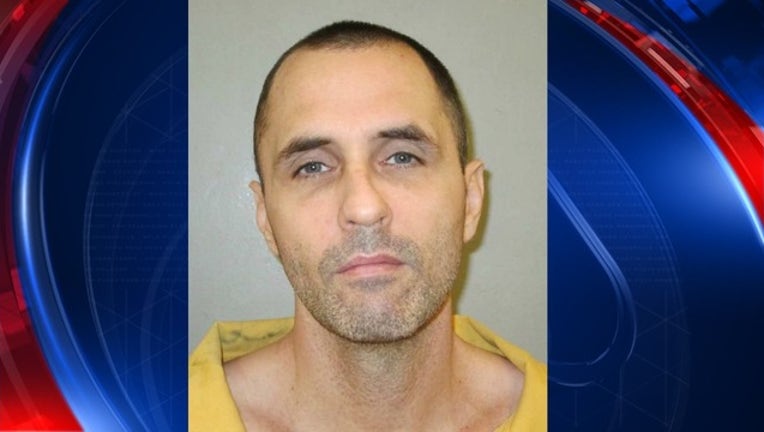 UPDATE: Escaped inmate Jimmy Causey was apprehended and is no longer at large, according to a tweet by the South Carolina Department of Corrections

COLUMBIA, S.C. (AP) - An inmate who has escaped twice from maximum-security prisons in South Carolina remained on the run Thursday as authorities sought the public's help in their manhunt by offering a reward.

The search for convicted kidnapper Jimmy Causey began Wednesday afternoon when prison officials realized he was missing. Authorities were still investigating how he escaped and released no other details about the circumstances.

The unspecified reward was announced Thursday, but authorities warned anyone who encounters the inmate to call 911 and not approach him. Causey's disappearance has people on edge just weeks after two inmates in neighboring Georgia killed their guards on a prison bus and escaped for two days before being caught in Tennessee.

Causey, 46, escaped this week from Lieber Correctional Institution, about 90 miles (149 km) southeast of Columbia. He was sentenced to life in prison in 2004 after he was convicted of holding a Columbia attorney and his family at gunpoint in their home.

In 2005, Causey and another inmate escaped Broad River Correctional Institution near Columbia by hiding in a trash truck.

The pair eluded authorities for three days before being apprehended at a motel along busy Interstate 95. A pizza delivery driver told The Associated Press in 2005 that she tipped off authorities when she recognized a customer as one of the two men being sought.

Both men were returned to prison. Two years later, Brewer was found hanging from a bed sheet in his cell. Grilled by state lawmakers about how the escape happened, then-prisons director Jon Ozmint blamed budget cutbacks that had forced his department to cut 800 security positions, leaving some areas like the trash compactor and loading dock unmonitored by officers.

The director also said the men had fashioned fake heads out of toilet paper and put them in their beds, fooling officers at a 7:15 a.m. prisoner count. After a 9:00 a.m. count came up short, officials did a roll call and realized the two were missing.

Following his capture, Causey was held in South Carolina's most secure, super-max facility in Columbia, but he was eventually returned to the system's general population.

Ozmint, an attorney who now consults with prison systems across the country, told AP on Thursday that there are a number of reasons why even escape-prone inmates such as Causey typically must be returned to the general population.

Ozmint said it's easy to criticize corrections officials when inmates escape, but concerns about inmate mental health have put limitations on the use of solitary confinement or other strict conditions sometimes referred to as "lockup."

"Inmates like Causey years ago were kept in lockup forever," Ozmint said. "Now, the courts have said they have to have a path out, and it has to be a meaningful path out."

It's also more expensive to house inmates in lockup units, with more security required for even the most basic movements and tasks. South Carolina has been moving away from a reliance on lockup since at least 2014, when the state settled a lawsuit over the treatment of mentally ill inmates.

"That guy is never going to stop trying to escape," Ozmint said, of Causey. "You can't keep him there forever anymore. It's really a Catch 22."

In December, another inmate serving a life sentence escaped from a different maximum-security prison in South Carolina. Authorities said 47-year-old Michael Allen Williamson stabbed a police officer during his escape from McCormick Correctional Institution in the western part of the state. The officer's protective vest deflected many blows, but she was treated for two stab wounds to her arm and shoulder.

Kinnard can be reached at http://twitter.com/MegKinnardAP. Read more of her work at https://apnews.com/search/meg%20kinnard .