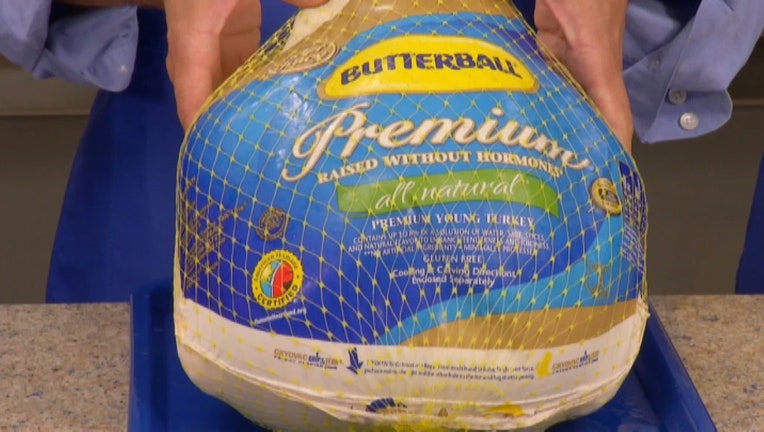 Butterball CEO Jay Jandrain said on Tuesday that Thanksgiving turkeys will be harder to find this year and also noted that it’s "reasonable to expect" higher prices amid supply chain issues.

Jandrain made the comments on "Cavuto: Coast to Coast," noting that "we don’t expect there to be a shortage overall, but we do see there will be fewer small turkeys this year."

He recommended that consumers "go out to the stores and get them as early as you can."

"In fact, we have heard from many of our retailers who are ordering additional turkeys now because sales have been brisk a little earlier than usual," Jandrain told host Neil Cavuto. "So we do expect a pretty significant sell-through this season."

Supermarkets started purchasing turkeys, spices and cranberry sauce early this year, the Wall Street Journal reported, noting that the goal was to avoid shortages that left some store shelves empty last year. Supply chain issues plaguing the economy have only verified that purchasing the Thanksgiving staples early this year was the right move.

Meantime, several companies have raised prices on consumers in order to offset rising costs that have occurred due to the supply chain disruptions and shortages of materials and labor coming out of the coronavirus pandemic.

MACY'S THANKSGIVING DAY PARADE IS BACK ... WITH RULES

In fact, Ocean Spray Cranberries Inc. CEO Tom Hayes noted on Monday that company costs have risen amid a "tough environment" and said some of it has been passed on to consumers.

"Like everybody else, our costs have gone up," Hayes told "Mornings with Maria" on Monday.

"There’s not an ingredient or a cost that hasn’t gone the wrong direction this year," he stressed.

Speaking with Cavuto on Tuesday, Jandrain pointed out that the company does not "set the prices for our retailers," but said, "it is reasonable to expect that there will be some increase in cost this year."

He also assured consumers by pointing out that they can still get "a pretty tremendous value" when purchasing turkey since it’s "a very economical protein."

Food prices, jumped 0.9% in September and are now up 4.6% annually, according to the Labor Department. Prices for meats, poultry, fish, and eggs, have climbed 10.5% this year.

According to recent reports, almost all the elements needed for Turkey Day dinners are increasing in price — including turkeys themselves.

On Friday, the U.S. Department of Agriculture released its "Turkey Market News Report," which found that turkeys between eight and 16 pounds are about 26 cents more per pound than they were last year.

Jandrain also noted Butterball made a "shift" in terms of marketing this year to target a wider audience.

"One of the opportunities that we really saw coming out of COVID last year was that there were more first-time hosts for the holiday and those are primarily millennials and of course we know where millennials get their information," he told Cavuto. "TikTok is a big resource for us."

GET FOX BUSINESS ON THE GO BY CLICKING HERE

"We really pivoted considerably this year on how we are approaching our marketing and who we’re trying to reach," he continued.

"We are certainly not abandoning the customers who have been there years and years, but a lot of people are entering the market and preparing the holiday meal for the first time so we want to address their needs and reach out to them as well."

FOX Business’ Ann Schmidt contributed to this report. Get updates on this story from FOX Business.