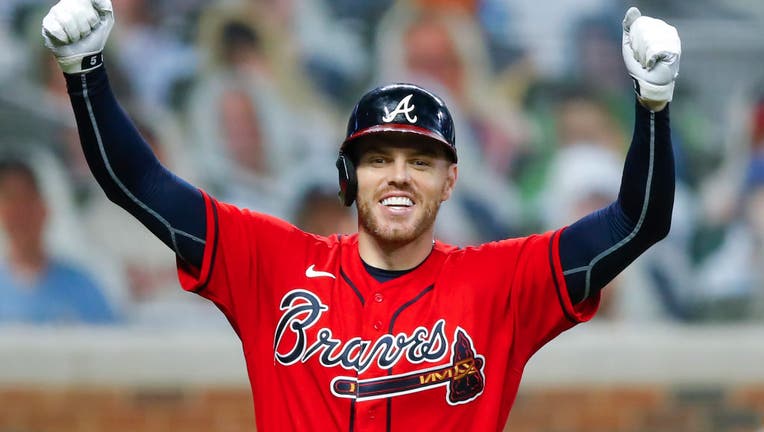 Freddie Freeman reacts after hitting his first career grand slam in the fourth inning of game two of an MLB doubleheader against the Washington Nationals. (Todd Kirkland/Getty Images)

The award, which is named after legendary Braves player and the team's senior vice president Hank Aaron, recognizes the most outstanding offensive performer in each league every year.

Freeman, the 31-year-old first baseman for the team, is only the second Brave to win the award since it began in 1999, the other being centerfielder Andrew Jones in 2005.

Baseball writers determine the finalists for the award, who are then voted on by fans and Hall of Fame players, including Aaron himself.

Freeman played all 60 games in the season, hitting a career-best batting average of .341, finishing in second in the National League to the Washington National's Juan Soto.

The first baseman also led the league in the number of doubles at 23, hit 13 homes runs, and drove in 53 runs - the most in the National League outside of fellow Brave Marcell Ozuna.

Freeman also finished in the top four of the major leagues in runs, hits, doubles, RBI, and walks - becoming the second player in baseball to do all five since Lou Gehrig in 1927.

In a Tweet, Freeman said called Hank Aaron "an incredible baseball player and an even better man.

"I am honored and humbled to win this award, he said.