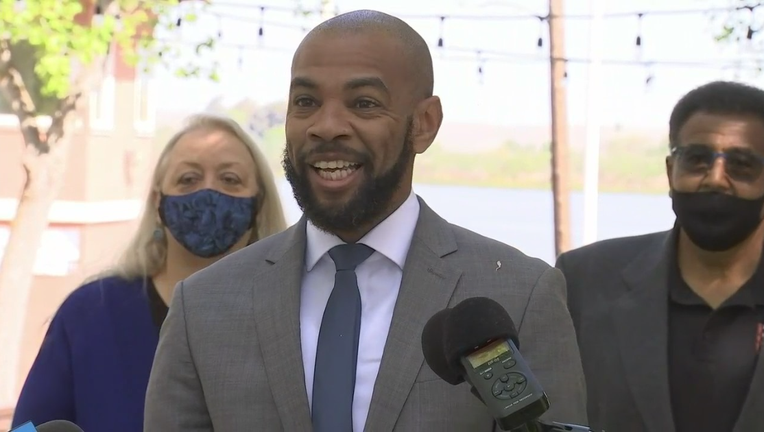 ANTIOCH, Calif. - Lamar Thorpe was born in a Los Angeles County jail. He was the only Black child among other children raised by Mexican foster care parents. He couldn’t properly read and write English in high school and was put in special needs classes.

And now, he’s the mayor of Antioch.

He's a champion of progressive platforms such as police reform and he became the first city leader in the Bay Area to formally apologize for past racist acts against Chinese immigrants a century ago.

"I don’t think my life is unusual because I lived it,"  he said with a laugh. "But yeah, I recognize it’s different than most people’s lives."

Thorpe’s leadership and unusual background are coming to the forefront at a time when many in the nation, and in this eastern Contra Costa County city of 100,000 people, are tired with the status quo.

"I voted for him because I knew we needed a change," said Gigi Crowder, executive director of the National Alliance of Mental Illness and a longtime resident of Antioch. "I didn't know him well, but I knew what I didn’t want."

What Crowder and a majority of voters didn’t want was a system that ignored issues of systemic racism and abuses in policing practices.

Thorpe was endorsed in the 2020 November election by major Bay Area newspapers as well as the California Democratic Party. He ran on a platform of police reform: He pushed for, and got, the city to buy police worn body cameras, a demilitarized police force, improved police hiring practices and he is currently working on the creation of an independent, civilian oversight commission over the police department, like the city of Oakland has.

Not surprisingly, the police union and those who support law enforcement were, and still are, Thorpe’s biggest critics.

The union leadership did not return phone calls seeking comment about Thorpe. But during election season, the police union sent out mailers warning residents that Thorpe as mayor would bring about more crime, increase homelessness and create more blight in the city. They also criticized his idea to turn a hotel into a homeless shelter.

The police union supported his opponent Sean Wright, a chiropractor and director of the Antioch Chamber of Commerce, who lost and who did not respond for comment.

Joy Motts, who also lost her city council seat in the last election and is president of the Celebrate Antioch Foundation, said she applauds the mayor for tackling "bold issues."

But she added that she believes that with Thorpe as mayor, "We’re not working together. The leadership is not working with police or school, our largest agencies."

She declined to provide more specifics.

Thorpe is used to adversity and said he decided to run for mayor specifically because of police abuse of power.

When George Floyd was killed last May in Minneapolis, Thorpe, as a councilman, asked his fellow colleagues to look into creating a police reform ad hoc committee, just to investigate the department and reimagine its responsibilities in the community.

"You would have thought I called for the police killing of every officer in the world," Thorpe said. "It was so disgusting."

In the end, Thorpe has been able to advance some significant police reforms.

He ultimately was able to convince the council to cancel the contract for police to guard the schools and get his colleagues to approve buying body cameras for the police department.

Antioch’s lack of body cameras came under renewed attention with the December 2020 death of Angel Quinto, when police put a knee on his neck during a fatal arrest, his family said. His parents captured his last moments as police don’t have their own technology.

And while he can take criticism and opposing points of view, Thorpe bristles when people accuse him of having an "absolute hatred of police."

To them, he answers: "They’re crazy."

Thorpe said he has no intention to do away with police completely, but like any institution, police have to be flexible and change with the times, such as: Should police still go out to every call, or could some of those dispatches be replaced with mental health workers?

"If we don’t ask questions, that is ridiculous," he said.

Thorpe, who co-parents his 11-year-old daughter with his ex-partner, has lived in Antioch for eight years.

He grew up in "the more challenging parts" of East Los Angeles.

His mother gave birth to him in the now-defunct Sybil Brand Institute women’s jail. She had beaten up a white man and carjacked him to sustain her heroin use, Thorpe said. She had actually scheduled an abortion and was arrested before it occurred, Thorpe said. He was born on April 6, 1981, before deputies could get her to the hospital.

He then spent his childhood with foster care parents he still calls his family to this day.

"I was very, very fortunate that I did not bounce around," Thorpe said. "My childhood was good in terms of stability. We always had seven or eight kids at our house."

His parents barely spoke English, and so Thorpe’s command of the language was less than proficient, though his Spanish was very good.

In fifth grade, he was sent to "Room C" in the special ed building because his teacher thought he was slow.

He was also regularly punished for "behavioral issues."

"‘Lamar, go to the office,’" he recalled being told. "‘Lamar, you’re not focused.’ Of course, I was the only Black kid who was the subject of attention."

Thorpe ended up graduating high school and started taking classes at East LA Community College. But he was failing.

"I couldn’t read and write," he said.

Still, he had dreams of attending George Washington University. He loved watching old VHS videos of Nixon, Reagan, Carter and Clinton. He wanted to go to a school where the White House was three blocks away.

Through a friend, he ended up joining the Navy. There, he was sent to East Timor and helped build a school.

He saw the children there had less than he did but woke up every day at 6 a.m. to learn.

The kids inspired him.

"I committed myself to learning," he said. "I bought the SAT book to learn new words. I got a writing-intensive job in the Navy, to transcribe records at trials. At first, they thought I was lazy but I didn’t really know how to proofread. I made people think I was more capable than I was."

After having struggled for so many years in high school with reading and writing, Thorpe basically taught himself formal English by working in the legal department of during his eight years in the military.

"They don’t know anything about putting on a uniform," Thorpe said of his critics. "I do."

He eventually left the Navy and was accepted to George Washington University, where he earned degrees in sociology and women’s studies.

Settling in the Bay Area

Thorpe moved to the Bay Area and first was hired at San Jose State University as a director of development and then he changed jobs to become the chief advancement officer at San Jose-Evergreen Community College.

He is now the executive director of the Los Medanos Healthcare District.

As father, executive and mayor, Thorpe has a lot to get done.

And he looks to what was "normal" in his unusual background as a pattern to follow as he leads Antioch into the future.

He remembers that despite some of the chaos and challenges of his young life, the city he lived in provided free swimming lessons and tetherball in the park for him and the other kids.

He now wants to be the kind of mayor who can bring these types of programs to the community of Antioch so that people feel safe.

He is trying to tackle gun violence in his city - noting that a 12-year-old girl was killed in his city last week – and also is launching a stronger partnership between the city and the school district to provide rich programs for students in Antioch.

"As I reflect back," he said. "I realize these programs kept me out of trouble. If I didn’t have them, I probably would have been running around in the streets."