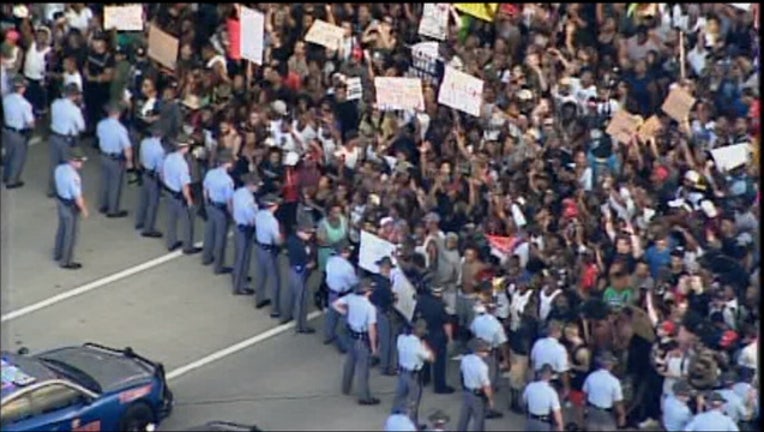 The Black Lives Matter movement isn't backing down, despite concerns about a backlash after the killings of five police officers by a black sniper in Dallas.

Organizers quickly repudiated violence against police, but also said they understand the frustration that led to Thursday's shootings.

"Black Lives Matter doesn't condone shooting law enforcement," said actor and model Sir Maejor, an organizer with the movement in Atlanta. "But I have to be honest: I understand why it was done. I don't encourage it, I don't condone it, I don't justify it. But I understand it."

Dallas Police Chief David Brown said that before he was killed, the gunman told a negotiator he had acted on his own, and was "upset about Black Lives Matter."

Police have not indicated whether the shooter had any involvement with Black Lives Matter, but the killings have put the movement under a microscope.

"This is a devastating time for us as activists and organizers. We cannot bring about justice through violence," said Jeff Hood, a pastor in Dallas who said he heard the shots and saw officers fall after Thursday night's rally.

The youthful organizers seem determined to keep up their pressure with angry marches, waving off criticism from some that they bear responsibility for the killings.

Many others — including such civil rights icons as U.S. Rep Congressman John Lewis — say the protests must remain peaceful to achieve justice.

"I was beaten bloody by police officers. But I never hated them. I said, 'Thank you for your service,'" Lewis tweeted Friday.

That comment prompted scornful responses by some African-Americans, who seek a more combative approach despite the backlash.

In Philadelphia, activists intend to channel that anger into a "Weekend of Rage."

"Everyone is not going to be on our side, but those who understand will join in the struggle and help educate the masses. We are hurting. We are tired. We are fed up," said Erica Mines of the Philly Coalition for REAL Justice.

The movement has grown as fatal shootings of blacks by police officers are increasingly recorded and shared on social media, sometimes as confrontations are still unfolding.

After this week, are activists concerned about their safety? Of course, says Black Lives Matter Philly organizer Laniece Williams.

"If the whole country seemed hell-bent on discrediting your organization and movement because we dare to demand that Black Lives Matter, and the media perpetuates the hate group rhetoric, would you or would you not be a little on edge?"

"However, we will not be stifled or stopped," she said. "We continue our efforts to bring about a better world for all of us."

A Texas organizer of Black Lives Matter, Ashton P. Woods, said the repeated shootings by police are pushing some unstable people over the edge.

"That does something to the human psyche. I don't care what color or ethnicity you are," he said. "We could say the same things about white hate groups that inspire xenophobia or hatred against Muslims."

"We can't really focus on whether people are going to cast us as a hate group when we are working to dismantle hate," Woods said.