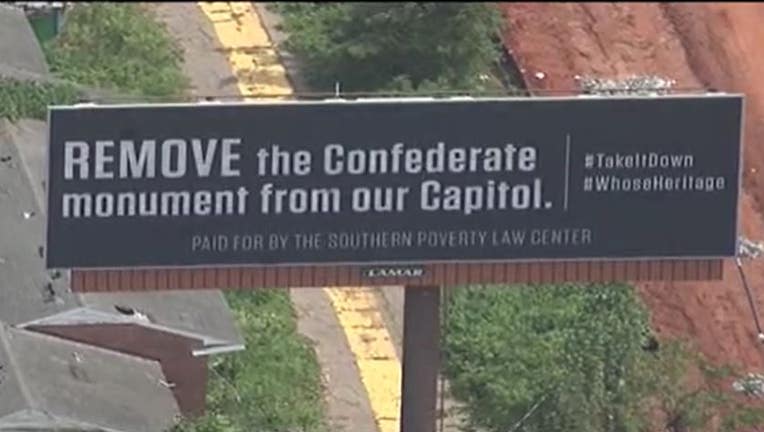 ATLANTA - A new billboard in Atlanta is calling for the removal of all Confederate symbols and monuments from public spaces across Georgia.

The billboard is located at the Langford Interstate 85 and 75 split heading into Atlanta from Hartsfield-Jackson International Airport.

In a statement, SPLC Chief of Staff Lecia Brooks says that it hopes that the billboard encourages "open dialogue by supporting Georgians working to remove Confederate symbols from their public spaces, many under pressure not only from opposing groups but their own elected officials. We also hope to give visitors to the area pause during a holiday weekend that celebrates American independence."

In 2019, Georgia Gov. Kemp signed a bill protecting Confederate monuments by prohibiting the dismantling and moving of publicly owned monuments without taking appropriate measures for their "preservation, protection and interpretation."

The bill also imposed a fine on anyone convicted of vandalizing monuments up to three times the cost of the damage, as well as legal fees and expenses for repairing or replacing the monument.

The legislation came about partly in response to failed proposals that would have allowed local governments to remove Confederate monuments.

In total, the SPLC says seven Confederate symbols were removed from public spaces in Georgia in 2020. This year, the organization says one statue has been removed, one has been relocated, and three symbols have their removal or name change pending.