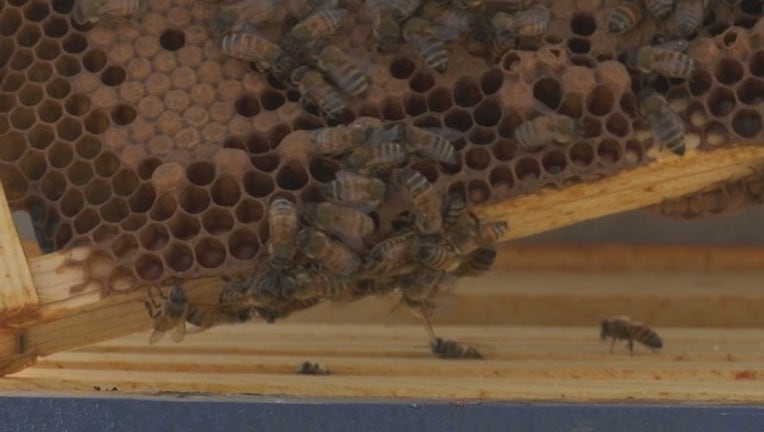 VALDOSTA, Ga. (AP) - Nearly 100,000 bees have found a new home on the rooftop of a campus building at a south Georgia university.

Researchers at Valdosta State University have relocated the bees there from other places on campus to increase their population, The Valdosta Daily Times reported .

Multiple departments at the university also hope to study them for clues as to why bees across the nation are dying off, according to the newspaper.

"Bees are very important little animals who are kind of being under attack with global temperature changes and also use of pesticides in our environment," said Ted Uyeno, professor of invertebrate zoology at Valdosta State. "They're slowly disappearing."

Scientists say the loss of bees is a huge problem for people, who rely on the insect for foods such as strawberries, pecans, melons and almonds.

The insects are pollinators and produce honey, but they are dying off by nearly 40 percent, Uyeno added.

Barry Futch, an environmental and occupational safety employee and a beekeeper of 20 years, has been trying to keep bees found around campus alive.

"Any time we get a call about bees, we try not to kill them if at all possible," Futch said. "I've been here 24 years, and we haven't had to kill a bee yet. It has been a good thing to save the bees and keep them going."

The nearly 100,000 bees are sorted in boxes based on where they came from - there are "Social Equity bees" who were rescued from the Office of Social Equity; another hive contains bees from Wesley Foundation.

Now, the hope is that students can learn from them.

"On the most basic level, all the students I teach are going to be citizens of our community in the future," Uyeno said. "If they have a chance to vote on some issues that allows us to be progressively more helpful to the bees, then that's a good thing."