The boy was getting pale and had a limp when a doctor diagnosed him with osteosarcoma. A surgeon removed a tumor in his leg, but took part of his femur with it. A new device is helping him return to playing baseball.

"I play first base," Madsen says.  "I've been playing baseball since I was 4, I believe. I love it, I think it's amazing."

He loves the warm-ups, the "action."

"The thinking about it," he says.

And, thinking about getting back here on the field has helped the Dallas, Georgia, 6th grader get through a curveball no one saw coming.

"I still have a limp, but I'm working my way to get me walking straight, and it's taken some time, but I can run faster and jump higher now," Madsen says. "So, I'm improving."

It's been a long road back.

Nolan was 8 in December 2018, when, playing with friends, he felt a pop high up on his right leg.

"He came running home, halfway crying, halfway laughing, and said, 'Please don't be mad, but something happened with my leg," his mother Kelly Ann Madsen says.

TRIP TO ZOO LEADS TO LIFESAVING DISCOVERY FOR NEWBORN AND FATHER

Looking back now at photos, Kelly Ann and Scott Madsen can see something wasn not right with their youngest child.

Nolan looked pale, with circles under his eyes, and he was losing weight.

He was also limping.

"The limp was getting worse," Madsen says.  "We iced it, we taped it, we did exercises, hot baths, Epsom salts, and nothing was making it any better."

The pediatrician thought the limp was growing pains, but Nolan's third-grade teacher pushed the Madsens to take him to an orthopedic surgeon. 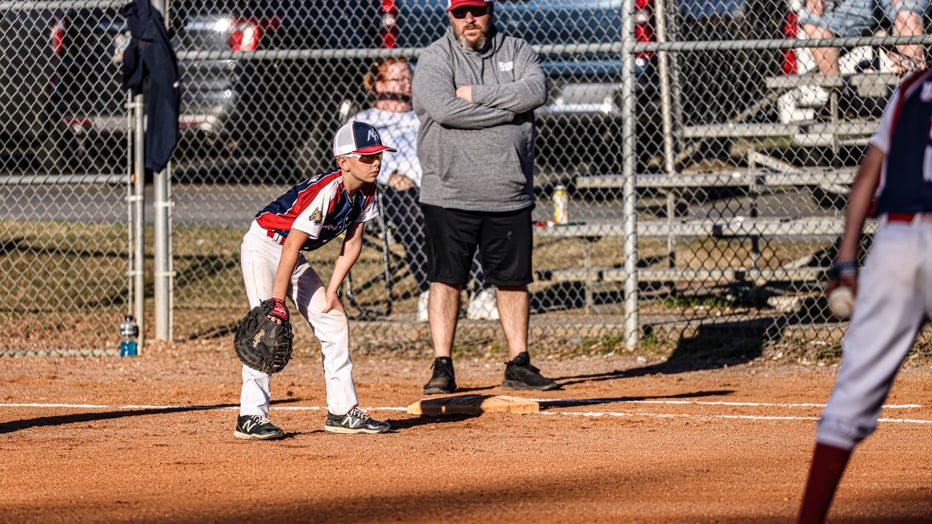 "I actually didn't know what it meant," she remembers.  "When he said osteosarcoma, I told him, I said, 'Slow down.  Say that and spell it.'  Because I was alone.  Scott was at work.  Our daughter was with friends.  We actually removed Nolan out of the room.  And he said, 'It's a form of bone cancer.' And that is when everything got really dark."

The tumor was large and malignant.

Before a surgeon could remove the mass, Nolan would have to begin 29 rounds of inpatient chemotherapy on the Aflac Cancer and Blood Disorders floor at Children's Healthcare of Atlanta at Scottish Rite.

Then, there was the operation to think about.

But, what about baseball?

"I was scared that I wouldn't be able to play, because I revolve around baseball." Nolan Madsen says.  "So, not being able to play baseball, it's kind of like, it's not saddening, but it's just like, 'What am I gonna do?'  Because I couldn't do anything else.  It's all I know."

So Nolan kept playing, with a chemo port in his chest.

"If we took baseball away from him, cancer could have taken him," Kelly Ann Madsen says.  "Because he needed, he needed to be a boy, and he needed to want something, and this is what he wanted.  So, we've played with a walker. We've come out here, and we've run like a crab.  We're not fast, and that's okay. He just loves playing baseball."

"They went in and put basically like your grandmom's hip replacement on steroids," Nolan says.

He now has an artificial titanium femur, with a gearbox right below his right hip.

It can be magnetically lengthened with a portable MRI every nine months, so his new device will grow with him.

"The machine turns on, and it unscrews a screw in that gearbox which then lengthens his leg," his mom says.

Back on the field, he had to relearn how to play with his new leg.

"I was scared I was going to break it, or hurt it again," he says.

But, he got back in the game,

"I was learning how to use my leg, and learning how to help myself, and how to stay fit and stuff, even with a limp," Madsen says.  "I didn't care what other people thought of me at the time. I just wanted to play."

And, play Nolan Madsen has, with cancer, through cancer, beyond cancer.

"He is the happiest, most thankful little kid you will ever meet," Kelly Ann Madsen says.