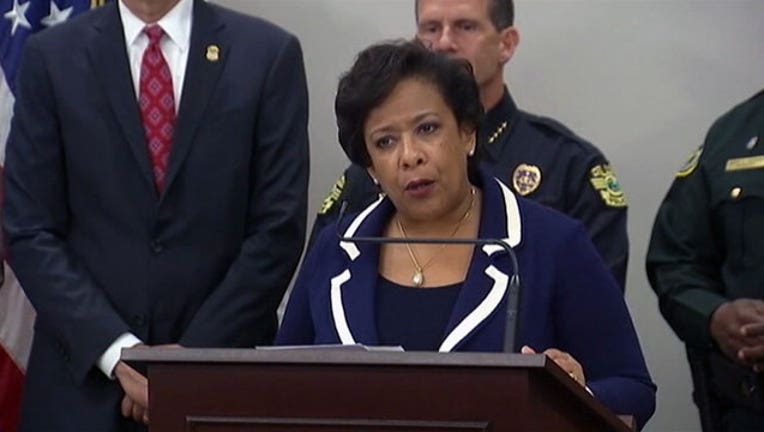 BIRMINGHAM, Ala. (AP) - Attorney General Loretta Lynch, in her final speech as head of the Justice Department, praised the work of the Obama administration to advance the dream of justice and said worries of difficult days ahead should be a call for action, not despair.

Speaking in Birmingham, Alabama, just days before leaving office with the inauguration of President-elect Donald Trump, Lynch praised the work of President Barack Obama and acknowledged - without mentioning Trump by name- some voters' anxieties for the future.

"I know that while our accomplishments should make us proud, they must not make us complacent. We cannot stop. We have to work. I know that in our pursuit of a brighter future, we still face headwinds. We still face oppositions. We see it. Waves of hatred, waves of intolerance and injustice that are still blowing in this country, and they seem to grow stronger the more that we achieve, Lynch said.

Lynch took the pulpit of Birmingham's 16th Street Baptist Church for a celebration ahead of Martin Luther King Jr. Day. The church was the site of a 1963 Ku Klux Klan bombing that killed four girls just weeks after King delivered his "I Have A Dream" speech. The Obama administration this week named the church and other Birmingham civil rights landmarks as a national monument.

Lynch drew parallels between the church bombing that killed the four girls and the massacre of nine people at a Bible study at Emanuel AME Church in Charleston, South Carolina, in 2015.

"Fifty years after that we still see our fellow Americans targeted simply because of who they are - not only for their race, but for their religion, sexual orientation and gender identity, as well," Lynch said.

She said 50 years after the victories of the civil rights movement there are "new attempts to erect barriers to the voting booth."

Lynch praised the work of the Obama administration and the Justice Department fight voting restrictions and prosecute hate crimes and to urge community policing tactics.

Lynch said the justice department has when, deemed necessary, investigated law enforcement departments for unconstitutional practices and policies and worked for reforms "because every American deserves to see law enforcement as a guardian, not a threat."

In an interview with The Associated Press Thursday, Lynch, who championed a repair of relations between police and communities, said the federal government must continue to hold police accountable.

Some in the predominantly African-American congregation and crowd said they were openly mourning the end of the Obama presidency.

"I cried. I cried. I never thought in my lifetime I would live to see the day that there was an African-American president," Tara Banks said.

Banks brought her granddaughter Kimorah Thomas to the church on her eighth birthday to learn about King's legacy and hear Lynch, the first female African-American to hold the post of U.S. attorney general.

Lynch said she recognized the anxiety that some have about what is ahead, referencing Trump without saying his name.

"And I have seen the concerns that the voting booth will be moved out of reach, that our hearts will close along with our borders, that a prayer in a different tongue or posture will place one at deadly risk. I have seen the fear that, with the turn of the electoral wheel, so many of us will be seen as children of a lesser God," Lynch said.

But Lynch added she has also seen the determination of men and women dedicated to the future of the country.

"Yes, these are challenging times and yes, we undoubtedly have more challenges to come. But many of our greatest strides, in equal rights, in human rights and civil rights have come after some of our most heartbreaking losses. .... We are Americans and we have always pushed forward," Lynch said.