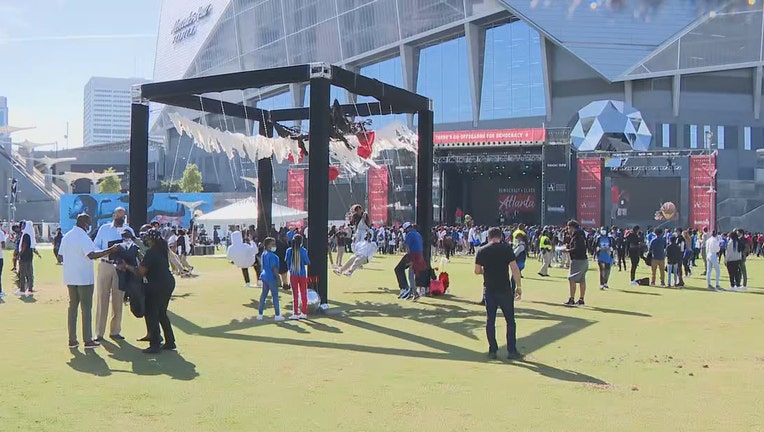 Atlanta Public Schools partnered with Rock the Vote and the Arthur Blank Foundation for a student event.

ATLANTA - A study from researchers at Tufts University estimated that 50% of young people, ages 18 to 29, voted in the 2020 presidential election across the U.S. — an increase of 11% from the 2016 election.

Atlanta Public Schools sought to capitalize on that momentum on Tuesday with an event outside of Mercedes-Benz Stadium. AMB Sports and Entertainment, Rock the Vote, New Georgia Project, and APS partnered to launch the event to impress the significance of democracy on students.

"As we all know, as it relates to elections and voting, the voice of our young people — particularly our high school students — if we start early and help them understand the power of their vote I think that's a difference-maker for their entire life and our community at large," Lisa Herring, Superintendent of Atlanta Public Schools, said.

Some of the 2,000 APS students who enrolled in APS' Democracy Class were at the stadium enjoying performances from local artists, a school dance and band showcase, activities and videos of celebrities offering support for Rock the Vote. APS collaborated with Rock the Vote on lesson plans on the history of local government that taught to 11th and 12th graders across Atlanta public high schools.

Herring said there were also college recruiters at the event.