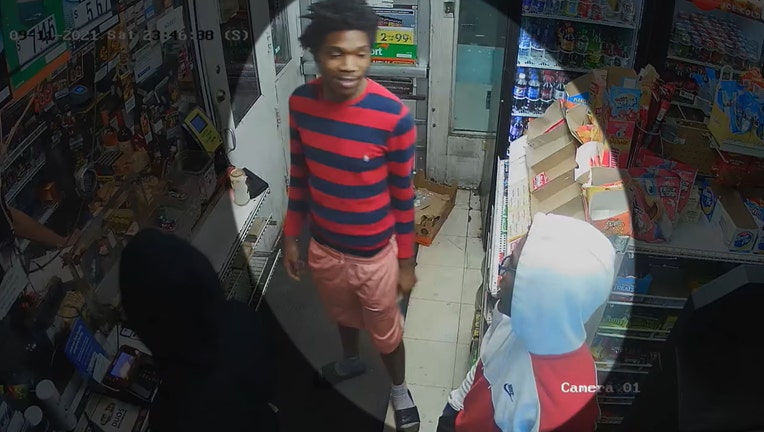 Police released surveillance video of three men talking in the store and highlighted a frame of one man wearing a red shirt with blue stripes, pink shorts and Nike slides. Police said the person he's talking to in the video, wearing a white and red N (FOX 5 Atlanta)

ATLANTA - Police in Atlanta are searching suspects in a shooting at a convenience store on Sept. 11 on Joseph E. Boone Boulevard.

Police said the person he's talking to in the video, wearing a white and red Nike hoodie, is the victim, who was shot inside the store moments later.

Police said the man was alert conscious and breathing when he was transported to a hospital. They found him rolling on the ground in pain inside the store when they responded at around 11:45 p.m.

A witness told police they heard one gunshot before someone left in a white car.

Another witness told police they did not hear an argument before the shooting.

According to the police report, the victim is seen on security cameras holding up a hand gesture before the suspect fired shots.

According to a police report, the suspect left the scene in a white car and headed east on Joseph E. Boone Boulevard.

Anyone who may recognize the suspect is asked to contact The Atlanta Police Department Youth Squad at 404-546-4260, submit a tip anonymously to the Crime Stoppers Atlanta at 404-577-TIPS (8477) or online www.crimestoppersatlanta.org or by texting CSA and the tip to CRIMES (274637).

Information leading to an arrest is eligible for a reward of up to $5,000, police said.