The Atlanta Police Department released this video showing officers battling illegally dirt bike and ATV use in the city on May 20, 2021. One officer was injured and two people were arrested.

ATLANTA - Two people were arrested and an officer is recovering after police attempted to stop multiple ATVs and dirt bike riders on Wednesday evening.

Those riders were spotted in the area of McDonough Blvd. around 7:30 p.m. Atlanta police said officers patrolling the area spotted a crowd watching several dirt bike riders attempting to do a stunt. Police said one of the riders damaged a nearby vehicle and fell to the ground.

When officers were taking that rider into custody, a group of riders came towards them. Police said one of the officers suffered a broken wrist.

"Each day our officers put their lives on the line to protect the City of Atlanta and reduce crime," the Atlanta Police Department wrote in a statement on their Facebook page.

The department called in the Phoenix Air Unit and Auto Crimes Enforcement Unit to follow the riders.

Police posted the video from their air unit showing the officers following the riders.

"APD will continue to use all available resources and the latest technology to locate and apprehend suspects who endanger others and prey on innocent victims," APD wrote. 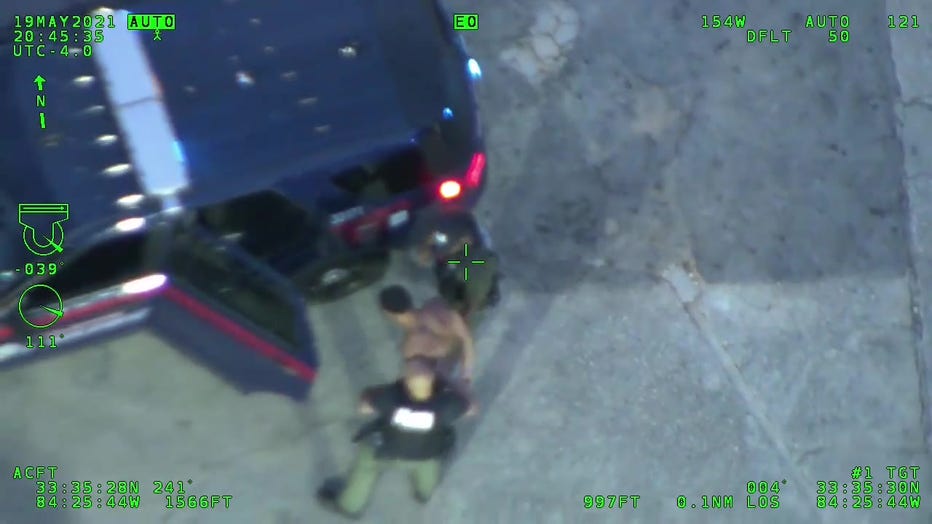 The air unit was able to track one of the dirt bike riders into Clayton County at 5995 Riverdale Road where he was taken into custody without further incident.

"We want to thank the superior skills of our air unit and the Zone 6 officers who assisted in the apprehension of these individuals. Just another day on the beat and another example of our commitment to public safety and professionalism," APD wrote.

Police said 21-year-old Edward Miller, of Atlanta, and 20-year-old Leonides Mercardo, of Norcross, were both arrested. Their charges are pending.