Andre Dickens became the city's 61st mayor on Monday afternoon in an outdoor ceremony at Georgia Tech. He is focused on addressing crime and policing in the city.

Dickens became mayor during a ceremony on Monday afternoon at his alma mater, the Georgia Institute of Technology,, at Bobby Dodd Stadium.

Atlanta Mayor Andre Dickens gives an address during his inauguration ceremony on Jan. 3 at Bobby Dodd Stadium on the campus of the Georgia Institute of Technology.

In his address, Dickens said he felt honored to be inaugurated at his alma mater.

Former Atlanta Mayor Shirley Franklin gave an address before Andre Dickens was sworn in as Atlanta's next mayor.

The Adamsville native and father recognized the accomplishments of his predecessors. He looked forward to the challenges he faces that will shape his mayoral legacy.

"Each mayor had their burden and mine is to bring us together to form a safe the thriving city," Dickson said.

Dickens commented on the Buckhead City movement, which is becoming a topic of debate as Georgia's latest legislative session approaches.

"We don't need separate cities. We must be one city with one bright future," Dickens said.

Dickens said the city has survived crime waves before and he believes it will pull through the one it's currently facing. 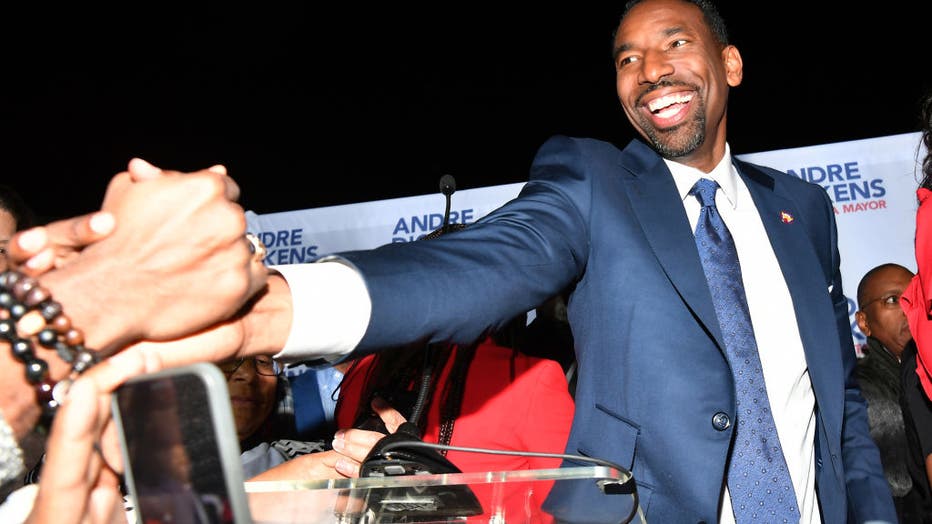 The mayor-elect spent the weekend taking part in community service projects across the city, including assembling personal hygiene kits and cleaning up Nancy Creek Park.

Dickens says he is ready to hit the ground running. One of his top priorities will be to beef up the lighting around Atlanta to hopefully increase safety.

Atlanta Mayor Andre Dickens takes his oath of office during his inauguration ceremony at the Georgia Institute of Technology's Bobby Dodd Stadium.

Saturday is a day of community service, followed by a virtual prayer service on Sunday. Andre Dickens will be sworn in at Georgia Tech's Bobby Dodd Stadium on Monday afternoon.

Who is Atlanta Mayor Andre Dickens?

The son of a single mother, Dickens made the jump to an engineering degree at the elite Georgia Tech and later earned a master’s degree in public administration at Georgia State University. Dickens is a Baptist deacon at church he helped found and has one daughter with his former wife.

The 47-year-old Dickens has long had his sights set on the city’s top office, recounting on the night of his victory a dispute between him and his mother Sylvia about when he first announced his ambition.

Before running for mayor, Dickens worked for TechBridge, a nonprofit that tries to use technology to aid other charitable groups. Dickens also founded a program to train people for technology work, trying to broaden access to high-paying jobs in Atlanta. He earlier ran a family-owned furniture store chain that collapsed in bankruptcy a decade ago, something Dickens blamed on the effects of the Great Recession.

What are Mayor Andre Dickens's plans for Atlanta?

Dickens has pledged to increase the number of police officers, arrest gang leaders and implement community policing. He says he may keep current Police Chief Rodney Bryant, who came out of retirement in 2020 after the previous chief resigned following a fatal police shooting of a Black man that led to unrest.

"The city is facing multigenerational poverty. We’re facing the highest income inequality in the nation. And yes, we are fighting a crime spike right now in this city," Dickens said, observing that his opponents were never the 13 other candidates who ran for mayor. "My opponent is homelessness, hopelessness, joblessness, racism, poverty, violence."