An Atlanta City Councilman wants the city to investigate whether it can make changes to e-scooter rental agreements that often strip riders of some of their legal rights.

ATLANTA - An Atlanta City Councilman wants the city to investigate whether it can make changes to e-scooter rental agreements that often strip riders of some of their legal rights.

E-scooter companies have language buried deep in their contracts saying riders forfeit their right to sue in the case of a malfunction that causes an injury.

Senior I-Team reporter Dale Russell found many riders sign up to ride without reading the full agreement and the councilman wants to make sure their legal rights are transparent.

After watching an I-Team investigation of e-scooter rider's legal rights, city councilman Michael Bond says he was stunned to learn riders often sign away their right to sue when they sign up to ride.

"I was aghast. I don't think they have any idea of what they are signing," said Bond.

The I-Team found that Bird e-scooter riders like Patricia Randall have found out the hard way that buried deep in the rental agreement, on page 30, is a warning that their "sole means" of resolving a legal dispute is not in a Georgia courtroom - but in arbitration in "Los Angeles, California."  That includes class action lawsuits. Though, you can sue in small claims court.

"It all of a sudden it just accelerated forward really fast and it threw me forward. And, there was nothing I could do to recover," said Randall.

Randall says she fell face first on a bird e-scooter. She fractured bones in her cheeks and broke her thigh bone. She couldn't sue, so she is now in arbitration trying to recover the costs of her medical bills and pain and suffering damages.

"It all of a sudden it just accelerated forward really fast and it threw me forward. And, there was nothing I could do to recover," said Randall.

"I didn't realize that the folks who were riding these scooters were assuming such liability for themselves," said Councilman Bond.

All four licensed scooter companies in Atlanta have some kind of arbitration agreement. If you file a claim you will have to go to arbitration where the company is headquartered unless the company agrees to come to your city.

"It's definitely one-sided. They have a get-out-of-jail-free card," said Randall. 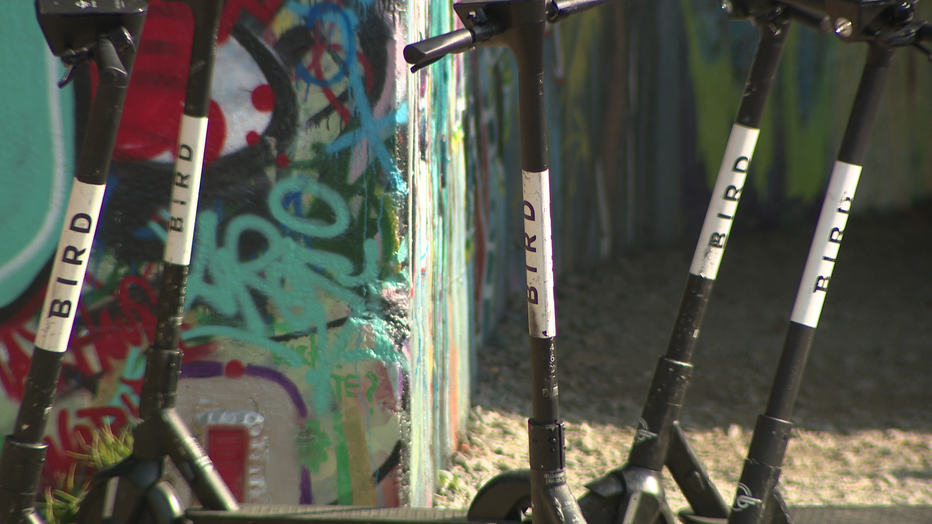 E-scooter rider agreements under fire. Buried deep in the agreement is a warning you can lose your legal right to sue if injured.

There is only one way to retain your right to sue in a real courtroom with a real judge and jury. You have to write the company in their home state telling them you wish to opt-out of the arbitration agreement.  But you have to do it soon after signing up to ride.

"There are so many things you are not aware of that even a lawyer couldn't explain to you if he or she was careful," said Levenson.

Most rides are convenient, picturesque, and uneventful.  But the city has reported more than 252 injuries since February of 2019. Including at least 4 people who died.

The city council voted to keep track of these injuries back in March of 2019. The council requested that 65 hospitals and medical clinics report all their e-scooter injuries.. The I-Team found not one clinic or hospital has reported an injury since 2019.

"We need to make sure that as the city allows these uses, they are not detrimental to the public ultimately. And, so if we are not getting the data we can't assess accurately the situation," said Bond.

Councilman Bond says he wants the public safety or public works committee to open an investigation, review the current contracts with all e-scooter companies, and determine if the city can require scooter companies to make their sign-up agreements more transparent.

"I don't want to say it's deceptive, but it certainly needs to be made more clear to the rider what is at stake when they are getting on that scooter," said Bond.

We emailed Bird headquarters for comment and did not hear back from them.