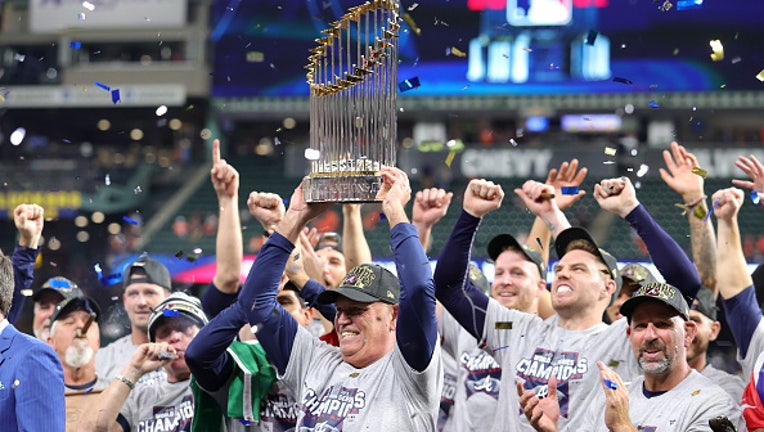 HOUSTON, TEXAS - NOVEMBER 02: Manager Brian Snitker #43 of the Atlanta Braves hoists the commissioner's trophy following the team's 7-0 victory against the Houston Astros in Game Six to win the 2021 World Series at Minute Maid Park on November 02, 20

ATLANTA - A parade to celebrate the Atlanta Braves winning the World Series will take place this Friday, the team announced following their victory over the Houston Astros.

The Braves brought it down to Game 6 against the Astros but managed to come out on top with a 7-0 win to claim the series.

EVERYTHING YOU NEED TO KNOW ABOUT THE BRAVES WORLD SERIES PARADE

Only the fourth team to go from a losing record before the All-Star break to the Fall Classic, the Braves have pulled off the near-impossible to become World Series Champions.

The team tweeted that a parade would be held on Friday and that further details would be announced Wednesday.

The victory would come as a shock to anyone in August when the team was stuck below .500. Yet out of nowhere, suddenly, these Atlanta Braves transformed themselves and took off.

"We hit every pothole, every bump you could possibly hit this year," Freddie Freeman said. "Injuries, every single kind of thing that could happen, that could go wrong went wrong, and we overcame every single one of those things."

Braves slugger Freddie Freeman said the team seemed to have hit every pothole, but somehow survived and it was incredible what the team accomplished this year.

By the end, nothing could stop them. Not a broken leg sustained by starter Charlie Morton in the World Series opener. Not a big blown lead in Game 5.

Steadied by the 66-year-old Snitker, an organization man for four decades, the underdog Braves won the franchise’s fourth title.

"They never gave up on themselves," he said on a postgame victory platform. "We lost a lot of pieces over the course of the summer and it was just the next man up."

Braves starting pitcher Max Fried said he just wanted to leave it all out on the field knowing it was his last outing of the season to try to shut it down.

Consider it a tribute to the greatest Braves player of them all. Aaron died Jan. 22 at 86, still pulling for his old team, and The Hammer’s legacy was stamped all over this Series.

As soon as the Braves won, it didn't take long for fans to flood sporting good stores like Dick's Sporting Goods at Cumberland Mall, which stayed open late for fans to get their hands on swag.

"Nobody ever wanted to let Hank down," Snitker said. "That’s just the way it was, we didn’t want to let him down. He charged us with a responsibility to make these guys better and we weren’t going to let him down."