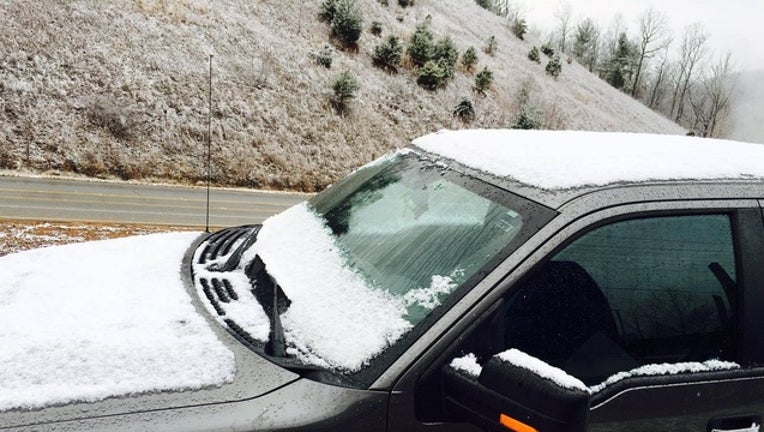 ATLANTA (AP) -- Shoppers emptied shelves of bread and milk, road workers began working 12-hour shifts, and states of emergency were declared in Alabama, Georgia and the Carolinas ahead of a winter storm stalking the South.

Winter storm warnings were issued for parts of Alabama and Georgia, including Atlanta, and into the Carolinas and part of Virginia. Schools canceled classes in several states. The approaching storm is a significant threat for the Southeast, where cities and states have far fewer snowplows than up north, and even a thin coat of ice or snow can grind traffic to a halt.

Early snow in Tennessee is being blamed for numerous fender benders around Nashville as the storm prompted early dismissals and FedEx warned of possible shipment delays from its hub in Memphis.

In Atlanta, where memories of a catastrophic snow and ice storm in 2014 are still fresh, city leaders pleaded with motorists not to venture out onto slick highways. The earlier storm brought traffic to a standstill on metro Atlanta freeways, and office workers were forced to spend the night in their cars, stuck in the gridlock.

Atlanta Mayor Kasim Reed said plans were in place for schools, companies and governments to dismiss students and workers early to avoid a repeat of the 2014 storm, when thousands of commuters left at nearly the same time, contributing to the epic traffic jam.

"Our goal, including the goal of the state, is to have everyone off metropolitan Atlanta roadways by 4 p.m.," Reed said.

Heather Anderson, a lawyer who recently moved to Atlanta from Chicago, said she and her colleagues were told they could leave work at noon.

"I'm laughing that they're saying frigid temperatures. I didn't even wear a coat today," she said.

At Hartsfield-Jackson Atlanta International Airport, the world's busiest airport, Delta Air Lines on Friday announced that 350 flights had been canceled ahead of the storm.

"We never close," airport spokesman Reese McCranie said. "This is something we train for throughout the entire year."

A mix of rain and sleet was expected across parts of Georgia on Friday. Two to 4 inches of snow could cover much of the state by Saturday morning, forecasters said. Snow-removal trucks and dozens of road workers from south Georgia were moved north to help clear roads, officials said. Many workers were on 12-hour shifts.

Freezing rain was expected in Alabama, according to the National Weather Service. In Mississippi, the downtown area of Jackson was emptying Friday, leaving deli owner Steve Long looking at lowered business. But he still made a pot of chili.

"I knew I'd sell chili, if nothing else," Long said.

Saturday's ceremonies formally marking the inauguration of North Carolina Gov. Roy Cooper have been canceled. Activities scheduled for Friday will go on as planned.

Shoppers were heeding the warnings and were out in force in search of staples like milk, bread and eggs.

Outside a Kroger grocery store in Durham, North Carolina, Alissa Miles was loading her car after stocking up on beer and hot dogs.

"I'm not expecting it to be something super terrible, but we do live in a place where the roads don't get salted," she said. "So we're expecting to be stuck in the house for a couple of days."

The storm was blamed for one death Thursday in Kentucky. Daniel Noble, 55, died after he rounded a curve in his pickup truck and slid into a rail fence about 14 miles south of the city of Jackson, authorities said.

"Pretty much the only sales we've made today have been firewood," said store manager Melody Nobles. Some customers told her they are stocking up because they're worried about the electricity going out.

Winter weather was also slamming parts of the West, prompting some dangerous conditions but also drawing skiers to the slopes.