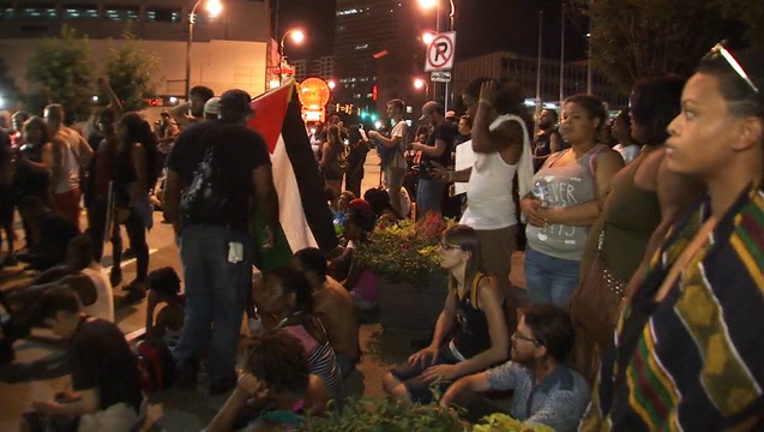 ATLANTA (AP) — Long-tenured members of Martin Luther King Jr.'s church have some advice for today's social justice activists: You're on the right side, but get organized, never use or condone violence, and always use the power to vote that earlier generations secured.

"Racists didn't drop off into the earth, they just changed their tactics" after the Civil Rights Act of 1964 and the Voting Rights Act of 1965, said the 91-year-old King, no relation to the civil rights leader he considered a personal friend.

"They took off their sheets and put on three-piece suits, and a few wear badges," he said Sunday, "but there is no justification for taking life — black, white, green or yellow."

Lifetime Ebenezer parishioner Thelma McClendon, 76, said, "young people now are just angry about so many things. What is their aim? What is their purpose? What specifically do they want? They better get a little better organized, and they need to vote."

Martin Luther King Jr. became the obvious choice to lead the nationwide civil rights movement in the 1950s and 60s, but there's no focal point yet to this 21st century version.

Black Lives Matter grew organically in response to the killings of black citizens by police, and it has avoided coordinating a national strategy. Leaders of locally run chapters have met with politicians, even presidential candidates, but they do not endorse.

Groups like Philadelphia's "Philly Coalition for REAL Justice" help set their cities' agendas, supported by many other organizations whose missions range from overhauling the criminal justice system to expanding economic opportunity.

This diffusion makes a movement more easily rocked by events like the Dallas massacre.

While hundreds joined the Black Lives Matter march in response to last week's videotaped killings in Louisiana and Minnesota — some of them taking advantage of the Texas open-carry law to show off their weapons — a lone sniper overrode their message by killing five of the officers keeping the peace.

Dallas Police Chief David Brown said Sunday that the gunman taunted police before he was killed, and said his attacks were in retaliation for the police killings of black men.

That stuck some Black Lives Matter leaders on a rhetorical tightrope.

The Rev. Jesse Jackson, an aide to King who witnessed his assassination in 1968, defended today's activists. In a Sunday interview, he said establishment critics will always tar leaders of social and political movements, no matter their structure, strategy or tactics.

"In the 60s, they used to tell us if we had not been marching, the dogs would not have been biting," Jackson said, referring to the police dogs that attacked demonstrators on the orders of political boss Bull Connor in Birmingham, Alabama.

The Rev. Steve Daniels in St. Paul, Minnesota, who grew up in segregated Mississippi, said "this generation is not going to take what we took. They're not afraid, and they're fed up."

Daniels, whose congregation at Shiloh Baptist Church includes the uncle of Philando Castile, the black man whose death outside St. Paul was live-streamed on Facebook, also said that young people are taking action because their parents and other leaders have failed them.

"They're hurt. They feel left out. They're frustrated and it shows, so they're lashing out because they're tired of being abused," Daniels said.

Activists' lack of cohesion reflects how multifaceted society's problems have become, and that's something no single group can overcome by itself, Jackson suggested.

"Our struggle -- the barriers were rigid and apparent," he said, citing legalized segregation that extended to every part of life in the 1960s.

"Today, we have our freedom, but we don't have equality," Jackson continued, bemoaning declining investment in public education, mass incarceration that enriches for-profit prisons and other ills.

"This kind of inequality breeds the tensions that lead to Baton Rouge and Minnesota and Dallas," Jackson said.

The same argument cascaded Sunday from the Ebenezer pulpit, where the Rev. Anthony Trufant was visiting from Emmanuel Baptist Church in Brooklyn, New York.

Rousing the mostly black congregation, Trufant blasted the notion that killings by police are always "the fault of people who don't know how to handle themselves in the presence of law enforcement."

He described a litany of social, political and economic wrongs; condemned the "sexist, homophobic, racist, imperialistic rhetoric" of presumed Republican presidential nominee Donald Trump; he called for "a living wage" and better health care and education.

Then his crescendo: "What bends me out of shape is when people don't recognize there is a reason for folks' rage. There is a basis for people's bitterness."

"Today, everybody has their own agenda, doing their own thing," she said after the sermon. But people still want the same thing as her peers: "We wanted what was good, what was right, and you just have to continue to fight for what is right."