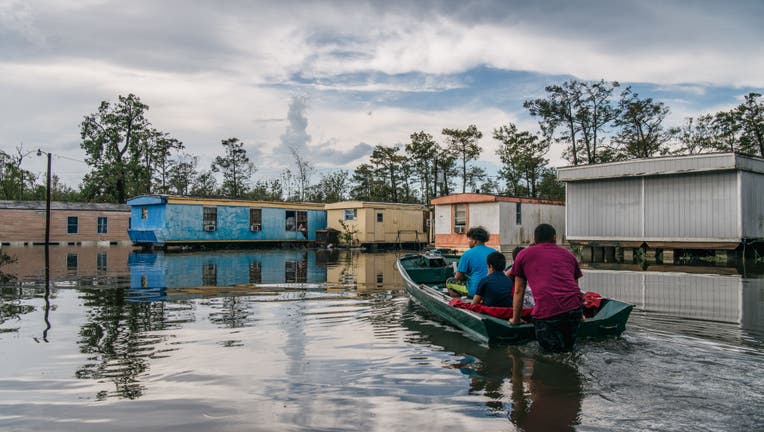 The Maldonado family travel by boat to their home after it flooded during Hurricane Ida in Barataria, Louisiana. (Photo by Brandon Bell/Getty Images)

The foundation announced Tuesday that it would give two grants of $500,000 each to the American Red Cross and the Greater New Orleans Foundation.

Blank, co-founder of The Home Depot and owner of the Atlanta Falcons, Atlanta United, and Mercedes-Benz Stadium, says he hopes the donation will play "a small part in helping those communities recover" by supporting the two organizations.

"At times like these, I hope we can set aside the things that divide us in a spirit of unity to help others suffering through a crisis simply because it’s the right thing to do," said Blank.

The number of deaths from the hurricane climbed to at least four in Louisiana and Mississippi, including two people killed Monday night when seven vehicles plunged into a 20-foot-deep hole near Lucedale, Mississippi, where a highway had collapsed after torrential rains.

More than 1 million homes and businesses in Louisiana and Mississippi were left without power when Ida slammed the electric grid on Sunday with its 150 mph winds, toppling a major transmission tower and knocking out thousands of miles of lines and hundreds of substations.

An estimated 25,000-plus utility workers - including Georgia Power employees - labored to restore electricity, but officials said it could take weeks.