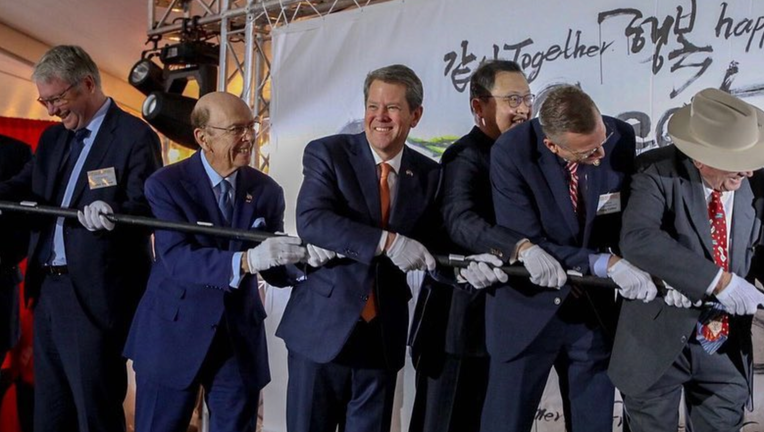 Governor Brian Kemp joined US Commerce Secrertary Wilbur Ross to welcome SK Battery to Georgia. Now the Korean company must decide whether it wants to pay a rival company to save 2600 jobs.

COMMERCE, Ga. - SK Battery is counting on the Biden Administration to reverse an order that threatens the future of its electric car battery plant in Jackson County. But a rival Korean battery manufacturer says the only way to save those 2600 jobs is to pay up.

As punishment, SK faces a 10-year ban from using the battery technology in the United States, including that massive Jackson County plant. SK had already lined up two big customers for its batteries: the new Ford Electric F-150 Pickup and Volkswagen’s ID.4 SUV being built in Chattanooga, TN.

The future of the SK Battery plant

SK Battery has two choices to save 2,600 Georgia jobs.

Already 250 people work inside the SK Battery plant, still under construction along I-85 in Jackson County.

It was on track for mass production by next year, eventually employing 2,600 people. But in a statement, parent company SK Innovation says it now has "serious concerns" about the future of the plant.

The state of Georgia agreed to $300 million in tax incentives to land the SK plant two years ago. But much of that won’t kick in unless the jobs appear.

The ITC is temporarily allowing SK to build those batteries for a few years, giving Ford and VW time to find a new supplier.

"This ITC decision supports our plans to bring the all-electric Ford F-150 to market in mid-2022," a Ford spokesman said.  "Providing this zero-emissions, purpose-built truck for our customers is an important part of our plan to revolutionize electrified vehicles and is a top priority for the company."

LG attorney Jung says SK should strike a financial deal with his company that would allow the technology to still to be used and the plant still stay on schedule.

But SK seems to have a different strategy: appealing to President Joe Biden.

"We are hopeful that the Biden administration will take seriously the negative economic and environmental impact of this decision and reverse it so that we can continue to operate," the company said in a statement.

Biden campaigned on an environmentally friendly platform, promising 10 million green jobs. The kind that was supposed to be coming to Jackson County.

"We don’t believe this decision in any way hinders that progress," said Jung.

Governor Brian Kemp called on Biden to intervene, saying the decision puts the future of the Jackson County plant "in peril."

"Litigation in these disputes is always complex, and there are several additional levels of review prior to a final resolution – along with the possibility of a settlement," said Kemp. "President Biden and his administration also have the opportunity to support thousands of hardworking Georgians – and their communities – who would benefit from SK Innovation’s continued success in our state. I sincerely hope Georgia’s congressional delegation will join me in advocating for swift presidential action."

The White House had no comment. Presidential vetoes of ITC rulings are rare.

Biden has 60 days to make a decision. In the meantime, LG says it’s waiting for a call from SK to make them a "viable" offer, while people in Jackson County are left to wait and worry.

Some SK Battery construction workers have complained about safety issues at the plant. Federal authorities say they've found Korean nationals illegally hired by subcontractors to help build the factory. SK Battery insists its worksite is safe and says contractors are punished if they bring illegal workers on the job site.