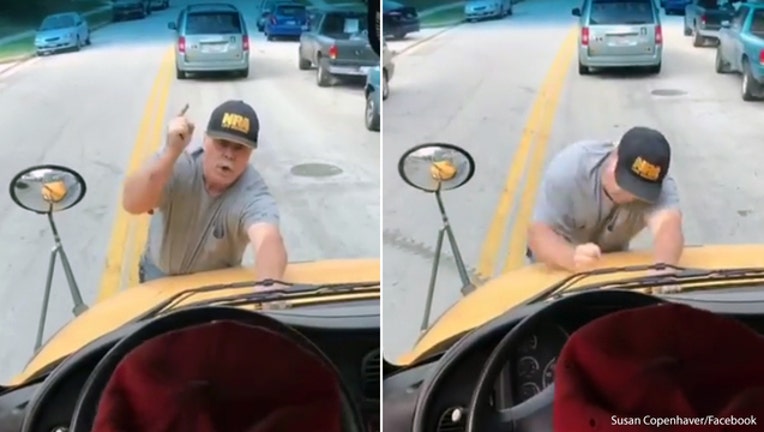 Baltimore County police said Leverne Ardin Doran was arrested after video captured him clinging to the front of a Loch Raven Middle School in Parkville, Maryland on Thursday, Oct. 5, 2017.

PARKVILLE, Md. - An angry Baltimore County man was arrested after he was caught on camera clinging to the front of a moving school bus.

Baltimore County police said it responded to Putty Hill and Hoerner avenues in Parkville, Maryland at about 3:15 p.m. on Thursday after a disturbance involving a school bus from Loch Raven Middle School.

Authorities said a man, later identified as Leverne Ardin Doran of Nottingham, Maryland, attempted to stop a school bus after a bottle was allegedly thrown from the bus and struck his vehicle.

Doran banged on the doors and attempted to get on the bus but the driver refused to let him on in fear for the safety of the students, according to officials.

When Doran wasn’t allowed on the bus, police said he jumped onto the front of the bus and held on as the bus driver attempted to get away. Video captured of the incident shows Doran pounding on the hood and demanding that the driver pull over and open the doors to the bus.

Authorities said the driver slowly drove toward a police department to seek help but became stuck in traffic.

Doran was later arrested without incident and has since been released from custody. The incident remained under investigation, according to officials.