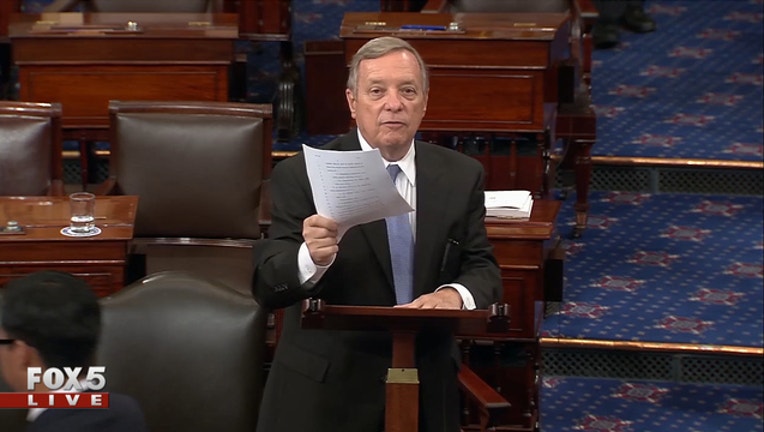 Senate Republicans want to back a still-being-written bill to erase some of Democrat Barack Obama's health care law, but they don't want the House to quickly approve it, send it to President Donald Trump and have him sign it into law. The uncharacteristic behavior was on full display Thursday, creating a surreal situation on Capitol Hill that would be comical if what lawmakers were doing didn't affect one-sixth of the economy and health coverage for tens of millions of Americans.

That's the GOP hope, that whatever they pass - skinny, a bit more robust, anything - is the means to an end. And the end is a House-Senate conference in which lawmakers hammer out a final health care bill fulfilling their years-long promise to repeal and replace Obamacare.

And what if the House passes the bare-bones bill? "That's a risk, but I presume there will be assurances or indications that that's probably not going to happen," Perdue said.

Sen. Roy Blunt, R-Mo., said the Senate would "send the bill over with every belief that the House will go to conference."

Others weren't so sure, and they weren't willing to take that chance.

"I've told everybody this cannot be the final product," said Sen. Lindsey Graham, R-S.C., who added that about half of the 52 Senate Republicans "would not tolerate the skinny bill being our final answer on health care. We want to have a chance to build it out."

In an unusual news conference late Thursday, Graham along with Sens. John McCain, R-Ariz., and Ron Johnson, R-Wis., insisted they wanted assurances from the House that it wouldn't vote. If not, they wouldn't back the Senate bill.

"A pig in a poke," Graham called the evolving Senate legislation.

So senators, who cast hundreds of votes each year, faced the prospect of voting for a bill that they really, really didn't want to become law.

That prompted Democratic Sen. Chris Murphy to tweet: "Seriously, this is weapons grade bonkers. 3 Senators just announced they will vote for repeal only if assured it will never become law."

"If moving forward requires a conference committee, that is something the House is willing to do," he said.

After narrowly moving ahead earlier this week on health care, the Senate has rejected the health care alternative crafted by Majority Leader Mitch McConnell, R-Ky., and turned back a plan to repeal now, replace later. Both efforts failed as more than a handful of Republicans joined forces with Democrats.

So on Thursday, McConnell and the Republicans were trying to come up with a lowest-common-denominator bill that would be a ticket to a conference, most likely in September. The parameters were basic and didn't address some of the major issues, such as the expansion of Medicaid.

Senators and lobbyists said the "skinny repeal" would eliminate two requirements of the 2010 law, that individuals carry insurance or pay a tax and that employers offer insurance. It would also ban federal dollars for Planned Parenthood, add money for community health centers and give states waivers so insurers could sell skimpy policies without the law's essential benefits, such as maternity care, wellness visits and drug treatment.

But there were parliamentary problems that could derail some elements, and the insurance company lobby group, America's Health Insurance Plans, and a bipartisan group of governors expressed serious concerns.

Meantime, the House was moving ahead on "martial law," meaning if the Senate sent a bill the House members could act in a day, even this weekend.

House Majority Leader Kevin McCarthy, R-Calif., advised members that "pending Senate action on health care - the House schedule is subject to change. All members should remain flexible in their travel plans over the next few days."

The House narrowly passed a far-reaching health care bill in early May that dismantled much of Obama's law. Conservatives with considerable sway in the chamber expressed opposition to the Senate's "skinny repeal."

Republican Rep. Tom Cole of Oklahoma said if he were a senator, he "wouldn't cast my vote ... contingent upon" the House acting or not acting.

If the House opts to wait and negotiate with the Senate on a final product, it was uncertain that Republicans could agree on a repeal-and-replace measure. September shapes up as a crucial test of the Republicans' ability to govern, with a must-do list with not only political implications but ramifications for the nation's economy.

Congress must raise the debt limit, pass a budget to enact tax reform and craft a spending measure to keep the government open, all while overcoming deep divisions within the GOP and disagreements with the Democrats.

Just like on health care, there were no guarantees.

EDITOR'S NOTE - Donna Cassata is the congressional news editor for The Associated Press.