FAIRFAX COUNTY, Va. (FOX 5 DC) - You would hardly call this Trump country. In fact, in Fairfax County in 2016 President Trump collected just over 28 percent of the vote.

But in two places on Burke Lake Road as well as on Ox Road, Adopt a Highway signs say the sections of roadways are being cared for by the "President Trump Fan Club."

A club Nick Umbs admits has just a few members. Himself, his girlfriend and a few chums.

"I thought it would be kind of a neat idea to do something kind of in support because all of this publicity that we see is always negative, negative, negative," said Umbs. “And I wanted to show that there are people out there who are supportive of the president who are doing good and good for the community".

At least twice in the last year Umbs, his girlfriend and others have picked up trash along both roadways.

"No matter what side of the aisle people are on they thank us, they roll down the window and give us a thumbs up, honk their horn"

The Adopt a Highway rules say no slogans or logos are allowed but there is nothing that precludes a fan club from taking on the job. 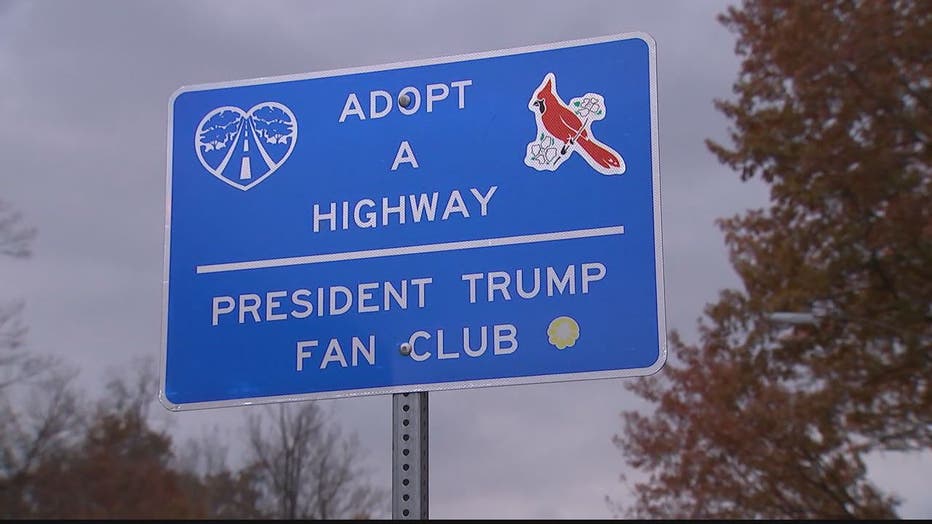 The rules also state if you are going to take on the project and get your name on the sign you have to agree to clean up the road two times of year. Preferable on Earth Day or in the Fall’s Day to Serve.

A man we talked to Wednesday near one of those signs — a recent immigrant from Rwanda — told FOX 5 the sign and what it stands for is what he loves about American.

"When I see something like that I really appreciate it," said Gilbert Mwenedatea. “People have the freedom of expression they can say anything they like to say I like it".

Umbs says in the more than a year since the signs have been up, no one has defaced or vandalized them.

During our interview—within view of the US Capitol where the Impeachment hearings were taking place—Umbs declined to comment on what he thought of the hearings or the current political climate we are in.