Hidden away in East Atlanta is one of the hottest properties on Airbnb. With one look around the Atlanta Alpaca Treehouse, the reasons become clear.

For Kara O’Brien and Kate Giroux, it was the chicken.

"I started with chickens, and they were a gateway livestock," says O’Brien.  "I was going to get goats because that's what people in the city of Atlanta do; you get chickens and graduate to goats."

But a little internet research led the East Atlanta residents in a much different direction, and instead, they ended up with a growing herd of energetic llamas and alpacas.

"They're very much empaths; they really feel what you feel," explains O’Brien about the animals with which she felt an instant connection.

"When they first got here, a lot of them were really scared and angry because they had been either abused or neglected," O’Brien continues.  "And then, to watch them unfurl into the environment and just come out of their shells...I mean, beyond gratifying." 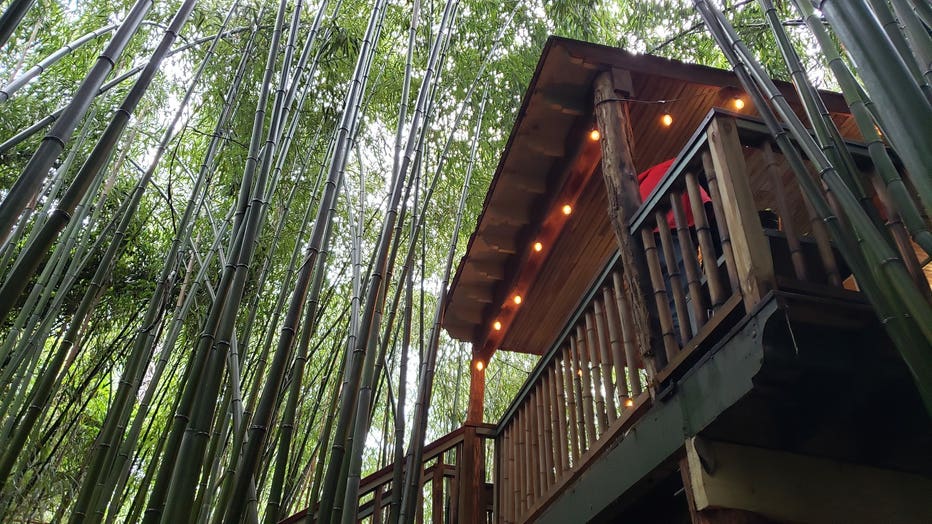 But providing a sanctuary for llamas and alpacas isn’t an inexpensive endeavor. And that’s why O’Brien and Giroux also provide a sanctuary for humans, in the form of the now-famous Atlanta Alpaca Treehouse.

Built from reclaimed materials — including late-1800s stained glass windows and turn of the century church floors — the treehouse is hoisted high above the couple’s backyard bamboo forest.  Over the past five years, it’s become a hot property on travel booking website Airbnb.

"It's one of the top Airbnbs in the world, which was very shocking and humbling to us," says O’Brien  "I mean, we never envisioned that at all."

Overnight guests from around the world book the property not just for a peaceful place to sleep, but also for a chance to meet the animals roaming below.  And O’Brien says the money raised through the Airbnb directly supports animal rescue efforts.

A lush, green paradise that helps travelers break away from the pack — while allowing the animals to be part of a new one.

Click here for more information on the Atlanta Alpaca Treehouse.