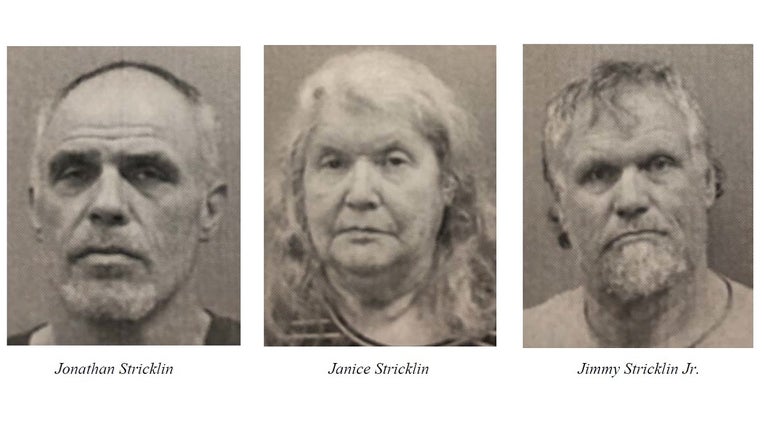 SUMMERVILLE, Ga. - Three Chattooga County family members have been arrested accused of stealing power and causing a fire to break out.

It happened Feb. at a home located along Wild Life Lake Road in Summerville. Jonathan Stricklin, 47, Jimmy Stricklin Jr., 54, and Janice Stricklin, 78, all face one count each of theft of service.

According to the Georgia Insurance and Safety Fire Commissioner’s Office, the Stricklins illegally obtaining power for their residence, leading to a fire.

“The home…was completely destroyed by the blaze, which started as a direct result of the illegal connection of the utility,” Insurance and Safety Fire Commissioner John F. King was quoted as saying in a release sent to FOX 5 News. “Money in the sum of $7,694.57 was allegedly stolen from the power company. Stealing power is not only an incredibly dangerous practice; it is a felony charge that brings a prison sentence of one to ten years.”

All three were booked into the Chattooga County Detention Center. As of Tuesday afternoon, Janice Stricklin has bonded out while the other two remained behind bars.

State officials were assisting the Chattooga County Sheriff’s Office in this investigation.