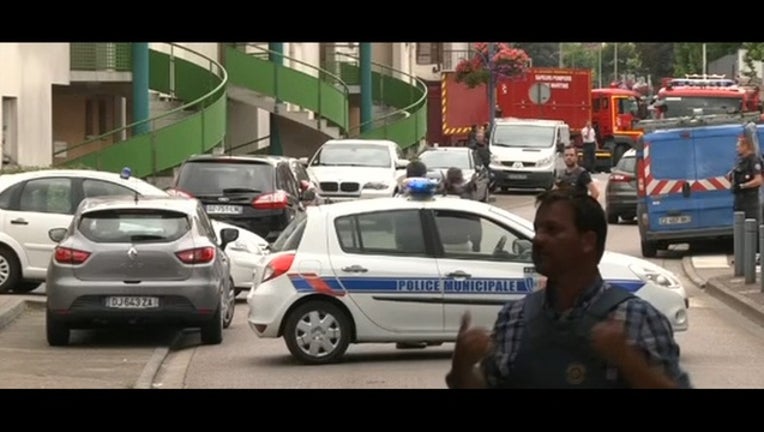 PARIS - Two attackers invaded a church Tuesday during morning Mass near the Normandy city of Rouen, killing an 84-year-old priest by slitting his throat and taking hostages before being shot and killed by police, French officials said.

Another person inside the church was seriously injured and is hovering between life and death, Interior Ministry spokesman Pierre-Henry Brandet

Police managed to rescue three other people inside the church in the small northwestern town of Saint-Etienne-du-Rouvray, Brandet told reporters, and the two attackers were killed outside the church.

The identities of the attackers and motive for the attack are unclear, according to a French security official who was not authorized to be publicly named.

Brandet said the RAID special intervention force was searching the perimeter of the church ahead of entering for possible explosives and terrorism investigators had been summoned.

It was the first known attack inside a French church in recent times. One was targeted last year, but the attack never was carried out. The anti-terrorism division of the Paris prosecutor's office immediately opened an investigation.

"I cry out to God, with all men of good will. And I invite all non-believers to unite with this cry," Lebrun wrote in a statement from Krakow, Poland, where Pope Francis was visiting. "The Catholic Church has no other arms besides prayer and fraternity between men."

France is currently on high alert after an attack in Nice on Bastille Day -- July 14 -- that killed 84 people and a string of deadly attacks last year claimed by the Islamic State group that killed 147 others. France is also under a state of emergency and has extra police presence after the Nice attack, where man barreled his truck down the city's famed Promenade des Anglais, mowing down holiday crowds.

Islamic State extremists have urged followers to attack French churches and the group is believed to have planned at least one church attack earlier.

In April 2015, an Algerian student who was arrested after shooting himself in the leg was found with heavy weapons, bulletproof vests and documents linked to Islamic State. He is charged with killing a young woman inside her car the same day. According to French authorities, the suspect, Sid Ahmed Ghlam, was sent by the Belgian Abdelhamid Abaaoud to attack a church in Villejuif, just outside of Paris.

A cell directed by Abaaoud later carried out the Nov. 13 attacks in Paris that left 130 people dead and the March 22 attacks in Brussels that killed 32 people.