Rain and wind rip through Rome

One family was sitting in their living room as a tree toppled down on top of them. Luckily, it hit another tree coming down and did minor damage to the home. Still, the couple said the whipping winds and heavy rains were incredibly worrisome. 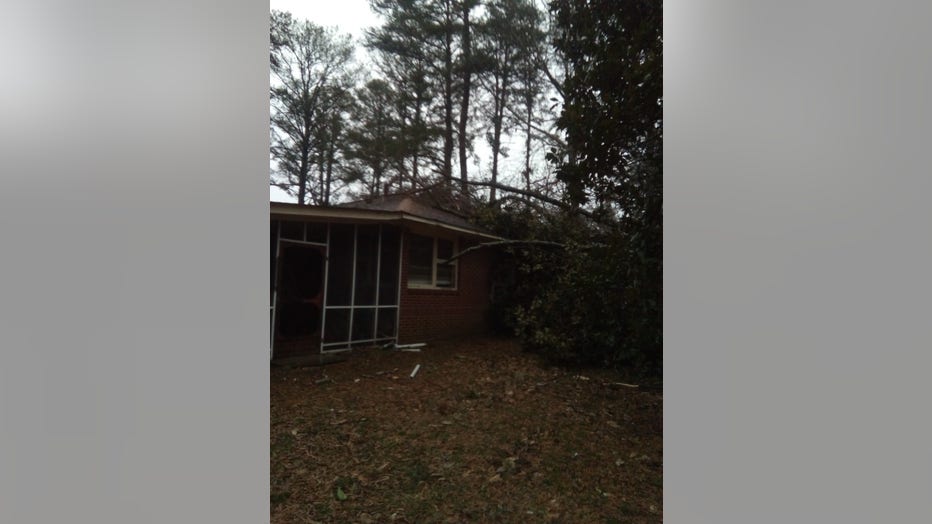 "I was so terrified and scared, I didn't know what to do," said homeowner Daniel Adams. "I just started shaking my head and started praying," he said.

Daniel Adams and Tamara Cameron were inside their home in Rome when the weather seemed to change in an instant.

"When I looked outside, all my trees were going in a circular motion, just whirling. I didn't know which way they were gonna fall," Cameron said.

Damaging winds, rain, and lightning pummeled the neighborhood, crashing onto one family's carport on Kenwood Drive.

For Cameron and Adams, their home was right in the storm's destructive path.

"I saw a tree getting ready to fall, like, it snapped, but it kept swirling and swirling, and then it ended up falling right on the living room," said Cameron.

A tree snapped onto their home and another fell across their driveway, taking a power line down with it.

"Everything was just circular, the rain the wind everything was going in circles. It was like the whole thing got sucked up in a cloud," said Cameron.

Now, the couple is left with a massive cleanup

"I've never seen anything like this before," Adams said.

"Somebody could've gotten hurt, and we were sitting dead underneath where that tree came down on our house," said Cameron.

They said they're just grateful the storm spared most of their home and their lives.

"I'm at a loss for words right now," said Adams.

"We're blessed, God was on our side," said Cameron.

Thousands of people were without power for hours in Rome, and crews are working around the clock to restore that power as soon as possible.