Will Smith back to work after press conference

New Braves closer wasted no time after his new team introduced him this afternoon at SunTrust Park, getting back in the gym to get ready for 2020.

ATLANTA - The Braves are not promising Will Smith the closer's role.

During his first news conference with his new team on Tuesday, Smith said he's fine with pitching in any inning. The Georgia native said he's just happy to move close to home and to pitch "for an organization I grew up watching with my family."

A 30-year-old left-hander, Smith wore No. 47 as a kid because that was Atlanta left-hander Tom Glavine's number.

Smith agreed to a $40 million, three-year contract with the Braves on Thursday following an All-Star season with San Francisco. The free agent turned down a $17.8 million qualifying from San Francisco and agreed to a deal that includes a $13 million annual salaries and a $13 million club option for 2023 with a $1 million buyout.

Smith's former clubhouse neighbor with the Giants, Mark Melancon, was 11 for 11 in saves opportunities with the Braves in 2019 following a midseason trade from San Francisco.

Braves general manager Alex Anthopoulos said Melancon is expected to enter spring training as the closer. The GM noted the decision will be made by manager Brian Snitker.

It would not be a surprise if Smith wins the job. He posted a 2.76 ERA with a career-best 34 saves last season for San Francisco.

"Will Smith is one of the better relievers in the game," Anthopoulos said. "It's a big add for us. We made our bullpen a lot better today."

Left-hander Sean Newcomb, who started only four games before pitching well out of the bullpen last season, will have another opportunity to win a spot in the rotation. Anthopoulos said that decision was made before the team signed Smith.

Teams are increasingly willing to utilize elite relievers in clutch situations before the ninth inning. Anthopoulos said he could foresee Smith being called on in the seventh or eighth innings, depending upon matchups and game situations.

Smith endorsed that strategy. He said a successful bullpen is filled with pitchers who see themselves as "the closer of that inning," no matter when they enter a game.

"If everybody takes that attitude, I think we're going to be all right out there," he said.

Smith is a native of Newnan, Georgia -- about 40 miles southwest of Atlanta. He said his family frequently attended Braves games.

With Smith playing home games in California, however, it was difficult for his Georgia family to follow his career.

"They would set an alarm for 12:45 to check the score and see if it was a save situation," Smith said. 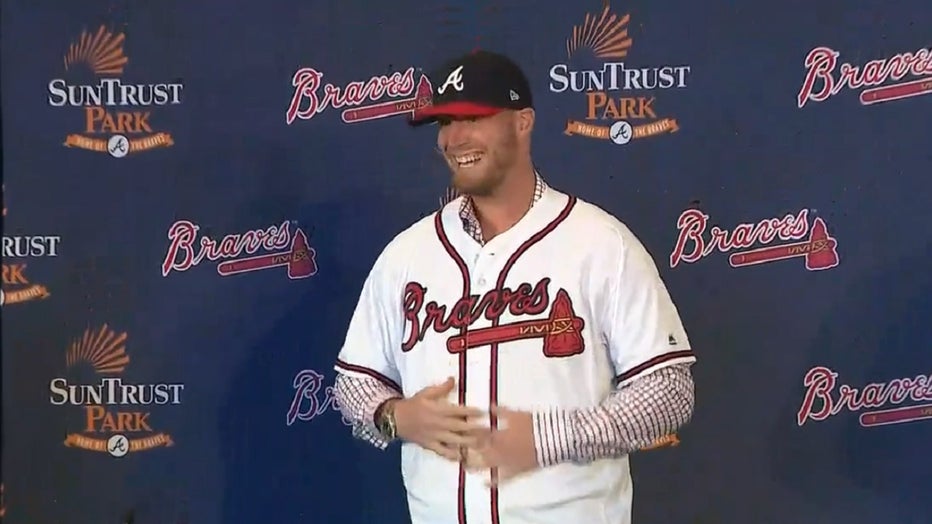 Smith said playing so close to home "was huge" in his decision to sign with Atlanta. He said he also wanted to play for a winner, and the Braves have won two straight NL East division titles.

Atlanta struggled to find consistency at the back end of its bullpen last season. Anthopoulos made three trade-deadline deals to acquire relievers, adding Melancon, Shane Greene from Detroit and Chris Martin from Texas.

Bullpen woes hurt the Braves in their NL Division Series loss to St. Louis. Atlanta led 3-1 going to the eighth inning of the opener, but Luke Jackson and Melancon struggled in a 7-6 loss.

Anthopoulos shot down any notion that he'll be looking to trade Greene after adding Smith.

"We're trying to have a deep bullpen," Anthopoulos said. "We like Shane. We're excited to have him."

Anthopoulos is looking for help at other spots, including third base. The team has made a qualifying offer to Josh Donaldson, who became a free agent after hitting 37 homers and driving in 94 runs with Atlanta.

Among other notable free-agent third basemen are Anthony Rendon and Mike Moustakas.

"There are a lot of good players out there," Anthopoulos said. "We're going to see if we can get something done."

If the Braves can't re-sign Donaldson or add another top third baseman, Johan Camargo and Austin Riley likely would compete for the job in spring training.