ATLANTA - Adapting and thriving is kind of Rodrigo Blankenship's thing.

From a walk-on-turned-scholarship player on the Georgia Bulldogs football team to now adjusting to a very different pre-draft process, the UGA fan favorite kicker continues to make the best of his opportunities.

FOX 5 Sports caught up on Wednesday with the UGA fan favorite kicker, who is also widely considered the best kicker available in the 2020 NFL Draft.

FOX 5 Sports caught up with Blankenship on Wednesday, and though as a specialist, cancellations due to coronavirus concerns have played a major part in teams' evaluation of him as an NFL prospect, he said he likes his odds when adversity hits.

"It's been an opportunity for everybody to learn how to adapt and handle adversity as I like to say," Blankenship said. "I think having the right mindset is critical for beign able to go about the situation the right way. And I just have the mindset that this is another opportunity to respond to adversity and respond to a difficult situation. Being a kicker, tough times are going to happen whether you like it or not." 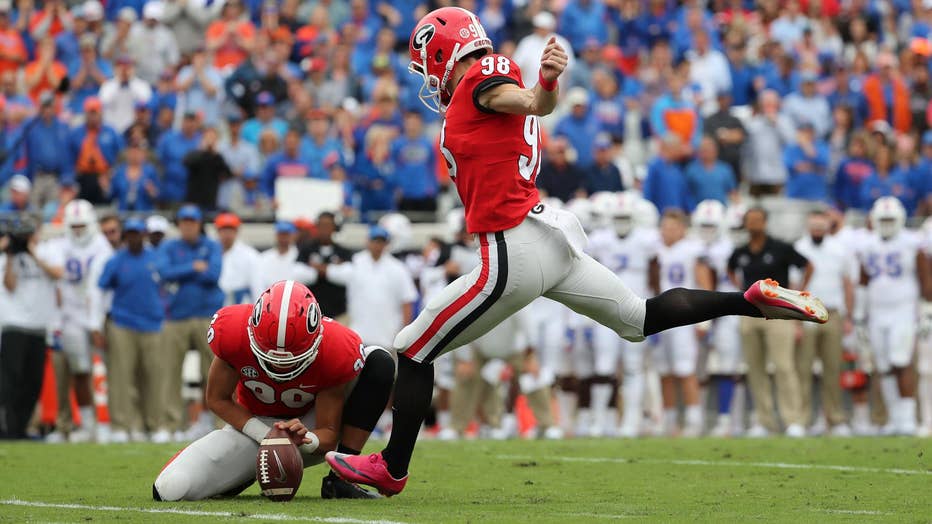 The Sprayberry High product hit 80 of his 97 field-goal attempts (82.5%) and 200 extra-point attempts to become Georgia's highest-scoring player in history with 440 career points in 53 games. The 2019 Lou Groza Award winner also was named All-SEC first-team by the Associated Press and the conference coaches last season.

The former walk-on, who earned a scholarship in 2017, his redshirt sophomore season, said it's wild to think that he is now widely considered the best kicker available in the 2020 NFL Draft.

"It has definitely been a long time coming. I had always dreamed of playing in the NFL and I had always dreamed about being drafted, but I don't think it ever really set in until I had gotten to UGA and had been there a few years," Blankenship said. "I think after that third season, I had a really good year, we went to the playoffs and played in the national championship game. I did some really good things that year, and that was kind of when I really realized, hey, I've really got a good shot at this."

‘Hot Rod’ confident he will be drafted on Day 3

FOX 5 Sports caught up on Wednesday with the UGA fan favorite kicker, who is also widely considered the best kicker available in the 2020 NFL Draft. However, as a specialist, cancellations due to coronavirus concerns have played a major part in teams' evaluation of him as&nbsp;an NFL prospect.

As his NFL Draft interviews move digital, he's gotten used to video conference calls as teams try to get to know him more beyond his impressive stats. He thinks he's talked to more teams virtually than he might have in a typical pre-draft process.

But in a normal NFL Draft cycle, specialist evaluation leans heavily on in-person drills and performance. This year, that of course didn't happen, and Blankenship said teams are relying more on college film to size up specialist prospects.

"It's kind of interesting to think, 'What if this had been a normal process?' A lot of teams had expressed interest in coming for private workouts and private meetings after pro day, and that was kind of standard procedure for specialists," Blankenship said. "Outside of your college career, that's kind of the best thing for specialists because you get the one-on-one time with the special teams coach, and he gets to put you through all the drills he wants to put you through, he gets to ask you to kick all the kicks that he would expect the team's kicker to be able to perform if they're going to bring him in the team. So that was kind of the best thing we had going for us, those private workouts, and we didn't get to have those."

Blankenship said the last time he's seen most of his NFL hopeful teammates was when they were all back in Athens for what would have been Georgia's pro day on March 18.

"But our pro day got cancelled about three or four days before it was supposed to happen," he said. "So that was a major bummer and I think that was when it really set in that we weren't going to get to have the draft process that we had hoped for and thought we were going to be able to have. So that was definitely when reality really set in for all of us."

Since then, he's run into a few of his fellow Dawgs when he goes to work out and kick at the intramural fields in Athens about two or three times a week.

"You kind of have to hedge your bets and hope that no one chases your off since I don't think we're technically supposed to be on them right now," he said, laughing. "But nobody is making a big issue of it since everybody is going about their own business trying to get some work in."

His working from home situation involves some weights and equipment like ankle weights and resistance bands that he was able to snag from UGA's athletic trainers before stay-at-home orders were enacted.

Other than that, he said he's been looking for new shows to watch since he and his girlfriend finished "Tiger King," among other TV shows.

As for his draft day setup, Blankenship said he's looking forward to watching Thursday's first round and then the second and third rounds Friday from his apartment in Athens. Until his number is called, he said he is "definitely excited" to watch his teammates get drafted early on. He's confident he will be a Day 3 selection, so he will head down to his parents' place in Marietta to watch that day with his family.