ATLANTA - Todd Gurley was born in Baltimore, went to high school in Tarboro, N.C., and went to college in Athens.

But now that he returns to the state of Georgia as an Atlanta Falcon, he said he feels like he's coming back home.

"Honestly it couldn't have worked out any better. It's a great situation for me," Gurley said Friday. "It's really home for me, so I'm really excited." 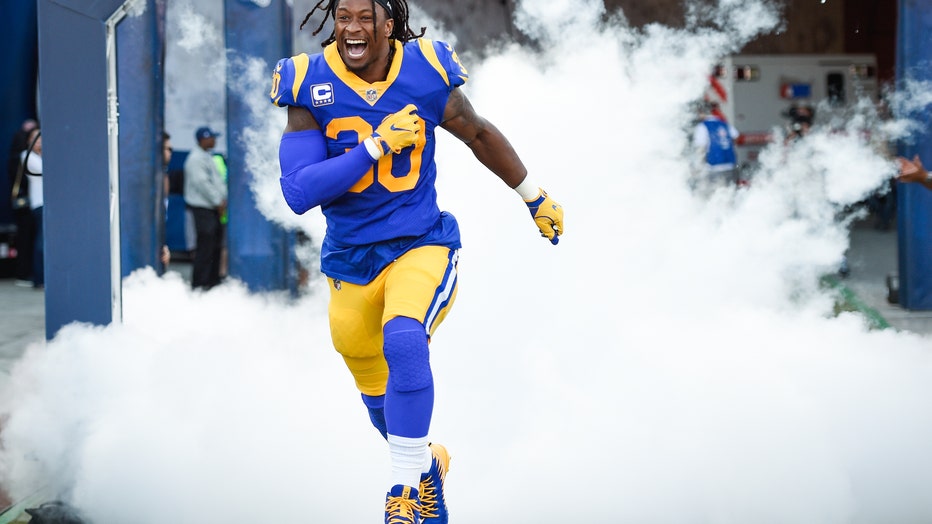 LOS ANGELES, CA - SEPTEMBER 27: Running back Todd Gurley #30 of the Los Angeles Rams enters the stadium ahead of the game against the Minnesota Vikings at Los Angeles Memorial Coliseum on September 27, 2018 in Los Angeles, California. (Photo by Kevor

Gurley earned All-SEC honors in 2012 and 2013 as a Georgia Bulldog and "became a man" there, he said. So he calls officially signing with the Falcons this week a "homecoming" for which he's truly excited.

"It was perfect timing as far as everything fell in place," he said. "I just felt like, this is the best fit for me. This is where I feel comfortable, and I feel like I can help them as much as I can help them."

But since leaving Athens and being drafted No. 10 by the Los Angeles Rams, time has been tough on Gurley. He's the first to admit it, saying "the last five years health-wise have been "the toughest five football-wise, being in the pros."

Atlanta signed him to a one-year, $6 million deal, which doesn't become official until Gurley passes a physical. Physicals have been put on hold in the NFL until travel resumes and team facilities open back up.

Gurely said he's not concerned, though.

"I'm pretty sure they wouldn't have signed me if they were concerned either," he said.

When Thomas Dimitroff spoke to the media on Tuesday, the Falcons GM said the team is "very comfortable" with Gurley's health.

However, Gurley's physical is certainly of importance. A persistent left knee injury limited his effectiveness late in 2018, and it carried over into last season, although he played in 15 games.

Gurley rushed for more than 1,000 yards in three of his five seasons with the Rams. He ran for a career-low 857 yards with the Rams last season, and his average of 3.8 yards per carry was the second-lowest of his career.

Gurley declined to discuss the possbility of load management in 2020.

Dimitroff added he believes in a rotation at running back "with Todd Gurley at the front of the line."

Gurley said he's ready to add to that running backs room in Atlanta, dive into the playbook and be a part of a possibly historic offense, which could have 11 starters who were first-round draft picks, which would be a NFL record.

"Everything in the NFL on paper looks good," Gurley said. "We just have to be able to put it together."