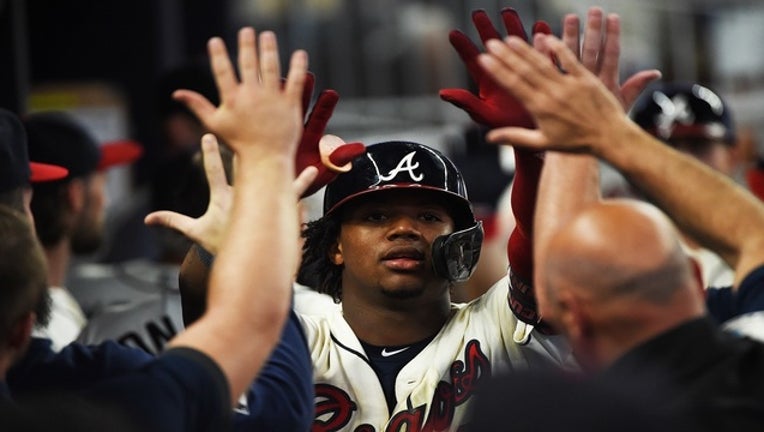 ATLANTA, GEORGIA - JULY 21: Ronald Acuna Jr. #13 of the Atlanta Braves celebrates a home run in the 8th inning against the Washington Nationals at SunTrust Park on July 21, 2019 in Atlanta, Georgia. (Photo by Logan Riely/Getty Images)

ATLANTA (AP) - Kevin Gausman pitched into the eighth inning after missing more than a month, Josh Donaldson and Ronald Acuña Jr. homered, and the Atlanta Braves beat the Washington Nationals 7-1 on Sunday night to protect their NL East lead.

Nick Markakis hit a two-run single in the first off Joe Ross (0-2). Donaldson added his sixth-inning homer off Ross and a run-scoring single in the seventh. Acuña launched a two-run homer off Kyle McGowin in the eighth.

Following a split of the four-game series, the first-place Braves still lead the Nationals by 6½ games.

Gausman (3-5) made his first start since June 10 after recovering from plantar fasciitis in his right foot. He allowed five hits and one run in seven-plus innings, with eight strikeouts and no walks.

The surprise was Gausman stuck with the same primary pitches - fastball and splitter - after working on a new cutter and his curveball during his minor league rehab assignment. The right-hander didn't change his plan even after the first two batters he faced - Trea Turner and Adam Eaton - hit long fly balls to the warning track.

Gausman had another scare when Anthony Rendon led off the sixth with a drive caught by Ender Inciarte at the center field wall. The right-hander then struck out Juan Soto and Matt Adams.

Gausman did not allow a runner to reach second base until the eighth, when he was pulled after giving up singles to Brian Dozier and Kurt Suzuki to open the inning. Pinch-hitter Gerardo Parra's bloop single off Anthony Swarzak drove in Dozier.

Ross, recalled from Triple-A Fresno before the game, allowed three runs on eight hits and two walks in 5 1/3 innings.

The loss by Ross snapped a string of 27 consecutive starts without a defeat for Washington starting pitchers since June 16. It was the longest streak since the 1916 New York Giants.

Acuña singled up the middle and was thrown out at second by Victor Robles to end the second inning. Acuña, who also walked in the seventh before his homer one inning later, has reached safely in 27 consecutive games, the longest active streak in the majors.

Freddie Freeman had three hits and an RBI.

Robles raced in toward the infield to make a diving catch of Dansby Swanson's shallow fly in the fifth.

Nationals: 1B Ryan Zimmerman left with an apparent right foot injury following an infield single in the second. Zimmerman, who missed 53 games with plantar fasciitis in his right foot this season, showed obvious discomfort while running down the line. ... RHP Max Scherzer (mid-back strain) could come off the 10-day injured list and return to the rotation Thursday against Colorado. Manager Dave Martinez said Scherzer "felt good" after he "let it go pretty good" while throwing in the outfield. Scherzer is expected to throw a bullpen Monday that could determine his status for Thursday. ... RHP Austin Voth, a candidate to start the game, was placed on the 10-day IL, retroactive to Thursday, with right biceps tendinitis.

Braves: RHP Patrick Weigel was optioned to Triple-A Gwinnett without appearing in a game during his two days on the Atlanta roster.

Braves: Following an off day, LHP Dallas Keuchel (3-3, 3.58) will start Tuesday night's opener of a two-game series against Kansas City. Keuchel is 4-1 with a 2.56 ERA in eight career starts against the Royals.