The Atlanta Falcons addressed a need in the secondary with their first Day 2 pick by drafting UCF safety Richie Grant No. 40 overall.

The Falcons started Day 2 off with a trade, swapping the Nos. 35 and No. 219 picks to the Denver Broncos for the 40th and 114th overall picks. 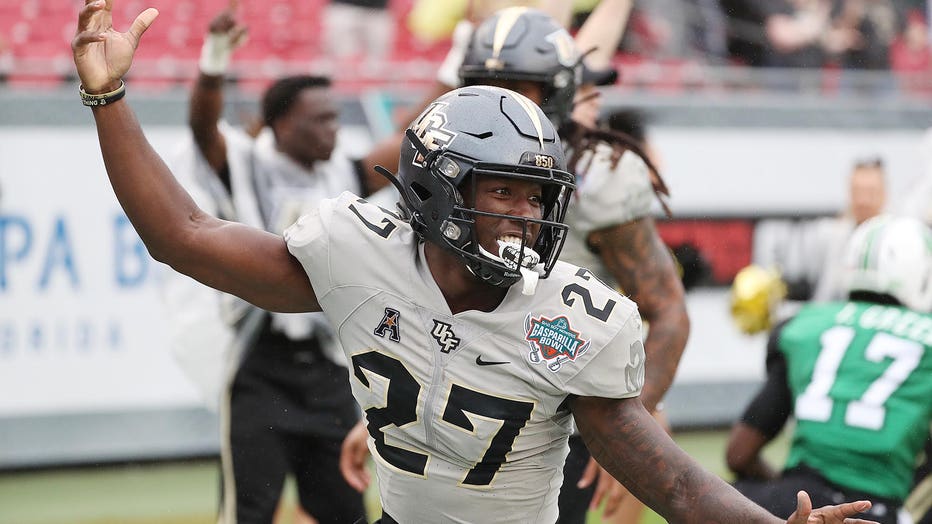 UCF defensive back Richie Grant (27) celebrates after a touchdown after an interception during the Gasparilla Bowl game of UCF versus Marshall at Raymond James Stadium in Tampa, Fla., on Monday, Dec. 23, 2019. UCF won, 48-25. (Stephen M. Dowell/Orlan

Grant has played at both free and strong safety, but he said Friday he expects to play primarily free safety in Atlanta. However, Falcons defensive coordinator Dean Pees is known for utilizing safeties in different ways.

"I can't say I knew, but I can say I knew it was a need," Grant said of his pre-draft conversations with the Falcons. "(After those conversations) I thought I might be a Falcon, and look at that, I'm a Falcon."

Grant also said he trained this offseason at EXOS in Alpharetta, where he met his now-fellow Falcons safety Erik Harris. The two became close, and they talked often about the possibility of being Falcons teammates.

The 6-foot, 194-pound Grant was considered one of the top safeties in the 2021 NFL Draft. At UCF, he recorded 10 interceptions, broke up 17 passes, and forced five fumbles. As a senior in 2020, he led the Knights with 72 tackles, adding 3.5 tackles for loss, one sack and a quarterback hurry.

The Falcons will also pick in the third round, at No. 68 overall, on Friday night.

Please check back for more updates to this developing story.