The national championship winner is projected as the No. 1 overall pick in April's NFL draft, the spot held by the Jaguars.

Lawrence had planned to throw  on Clemson's Pro Day on March 11, but moved up things when he learned he'd need surgery on his left, non-throwing shoulder. Lawrence said doctors have told him he should be able to throw within six to eight weeks of surgery.

Lawrence threw about 40 passes, moving from short swing patterns to red zone tosses before finishing with several throws between 50 and 60 yards. 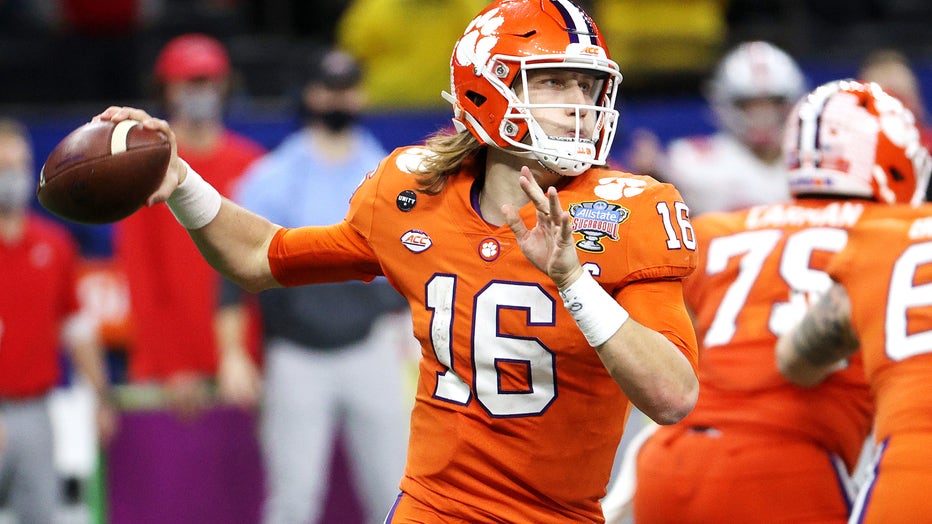 NEW ORLEANS, LOUISIANA - JANUARY 01: Trevor Lawrence #16 of the Clemson Tigers passes against the Ohio State Buckeyes in the second half during the College Football Playoff semifinal game at the Allstate Sugar Bowl at Mercedes-Benz Superdome on Janua

While 16 NFL teams attended, the 6-foot-6 Lawrence with the cannon arm and flowing air doesn't figure to get past the Jaguars. Meyer stood within a few yards of his future quarterback while talking with Clemson coach Dabo Swinney.

"I was pretty pleased with it," Lawrence said. "Like anything, there are a few throws you want back. But overall it was a good day."

Lawrence had a stellar career for the Tigers, deciding to jump to the NFL after three seasons. He was 34-2 as a Clemson starter, leading the team to three Atlantic Coast Conference titles and the 2018 national championship.

He completed 66% of his passes in college for 10,098 yards, 90 touchdowns and 17 interceptions. Lawrence also ran for 18 touchdowns in his career.

Lawrence also emerged as a leader in his final season. He was front and center in Clemson's efforts to promote racial justice after the death of George Floyd in Minneapolis last May. Lawrence helped organize a campus march.

Lawrence also was a prominent face of college football's campaign to play this season when the coronavirus threatened to cancel things. He strongly talked up the positives of playing in a "(hash)WeWantToPlay" movement on social media.

He had been pegged as an overall No. 1 pick since arriving at Clemson. He said he wanted to perform for NFL teams to show he's no different than anyone else applying for a job.

"I still want to do the process the right way," he said.

Lawrence planned to have two months to prepare before Clemson's Pro Day, "but life happens sometimes."

"But showing I'm able to adjust," he continued, "and give teams the chance to see me throw, that was important to me."