What is next for critical race theory debate in Georgia schools

The Georgia Board of Education joins the debate to speak out against critical race theory. Some officials who opposed to the resolution said if any of these changes become official, they're taking it to court.

After the state board of education passed a resolution denouncing the teaching of the theory in the classroom, we’re taking a look at what’s next.

The 11-2 vote earned the praise of Gov. Brian Kemp and Attorney General Chris Carr, but it does not force districts to change anything in their curriculums – yet.

"No action is required by school districts in response to the resolution," said Scott Sweeney, chairman of the State Board of Education. "Currently, no resolution related proposed rule is up for consideration."

SEE ALSO: What is critical race theory, and why is it causing controversy?

However, the resolution passed vows to "consider actions codifying" rules that would effectively ban anything that might make a student feel guilty on the basis of their race.

Lisa Morgan, president of the Georgia Association of Educators, argues that the resolution wasn’t based on anything that’s currently being taught in classrooms.

"It’s at this point, trying to solve a problem that isn’t a problem," Morgan said.

Georgia board of education passes resolution on race

The resolution outlining the teaching of racism in classrooms throughout the state.

Critical race theory, which examines how racial division intersects with many of the country’s institutions, has become a hot-bottom topic in recent weeks. Morgan contends that the opposition surrounding it is centered on a misunderstanding of what it actually is.

"Someone heard something and they think it might eventually happen so they’re going to have a big furor over it now," she said.

"What we have seen so far is I think an attempt to make a bogeyman out of a theory that is both not being taught and at best would allow us to introspect and figure out what stories are not being told," Blair told FOX 5. 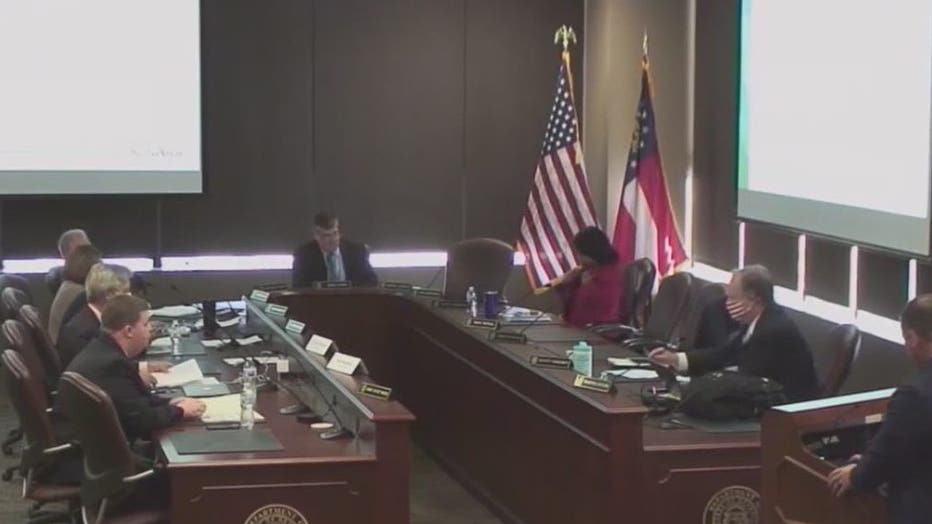 Sweeney, with the state board, said that they can’t just up and change the rules overnight.

"Rule adoption, if any, is a multi-step process involving agenda posting, committee discussion and approval, board approval to post a proposed rule change for a 30-day period, and then adoption consideration by the State Board of Education," he said in a statement emailed to FOX 5. "Following an initial 30-day posting review period, proposed rule modification(s) may necessitate an additional 30-day posting period prior to the board’s consideration for adoption."

We followed up with Sweeney, asking if this action was in response to any specific instance of critical race theory being taught in a public classroom in Georgia, but he did not respond Monday evening.

There has been a lot of outrage over critical race theory being taught in schools, but what exactly is it?

While the resolution says politics don’t belong in the classroom, both Morgan and Blair Jr. believe that’s exactly the underlying motive for the resolution.

"It became a buzz word and then all of a sudden everybody’s against this buzzword and nobody’s really sitting down to do some reading to understand what they are talking about," Morgan said.

Blair said that restricting the stories of the struggles of Black and Indigenous people of Color in the context of American history is, itself, part of a broader political agenda.

Several groups opposed to the move by the school board say if the ban on critical race theory end up becoming official, the matter will end up in court.

The next State Board of Education meeting is scheduled for June 17.