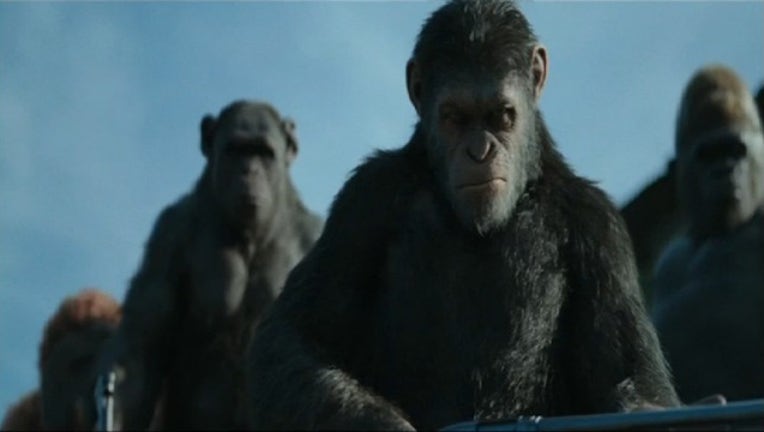 NEW YORK (AP) - Monkey business still pays. "War for the Planet of the Apes" took down "Spider-Man: Homecoming" at the North American box office, opening with an estimated $56.5 million in ticket sales.

Though some initially expected a closer race, "Spider-Man" dropped to second with $45.2 million after its $117 million debut last weekend. But director Matt Reeves' "War for the Planet of the Apes" pulled away thanks to strong reviews for the third installment of the rebooted "Apes" franchise. Led by Andy Serkis' celebrated motion-capture performance as the ape leader Caesar, "War for the Planet of the Apes" won a 94 percent fresh rating on Rotten Tomatoes.

Fox's "Apes" led something of a summer anomaly: There is an unusual confluence of acclaimed films in release. Five of the top six at the box office ("Apes," ''Homecoming," ''Baby Driver," ''The Big Sick" and "Wonder Woman") boast Rotten Tomatoes rankings of 92 or better, and the sixth ("Despicable Me 3") was largely received as a solid enough family release.

"What I think sets the 'Planet of the Apes,' these three films, apart from other franchise films, is that it's not gratuitous sequel-itis," said Chris Aronson, Fox's distribution chief. "This is storytelling, and it's episodic storytelling. It's not 'Well, let's put the band back together.' "

Aronson believes the good word-of-mouth will carry "War for the Planet of the Apes." ''At the end of the day, we're going to have a terrific multiple and it will be a lot closer to 'Dawn' than it will be 'Rise,' " he said.

The weekend's other most notable new entrant was Kumail Nanjiani's acclaimed romantic comedy "The Big Sick," which expanded to about 2,600 theaters after three weeks of limited release. The Lionsgate-Amazon Studios film, produced by Judd Apatow, made $7.6 million - a rare success for a comedy in a summer full of disappointment .

The horror film "Wish Upon," from Broad Green Pictures, was the weekend's only other new release. It opened with $5.5 million and a dismal C CinemaScore from audiences.

Estimated ticket sales for Friday through Sunday at U.S. and Canadian theaters, according to comScore. Where available, the latest international numbers also are included. Final domestic figures will be released Monday.

Estimated ticket sales for Friday through Sunday at international theaters (excluding the U.S. and Canada), according to comScore: