University of Minnesota student gets hit by vehicle

A student says he learned his lesson after getting smacked by a vehicle on University Avenue not far from the University of Minnesota campus.

MINNEAPOLIS (FOX 9) - Shocking security camera video shows the moment a University of Minnesota freshman is hit by a car while riding a scooter through an intersection on campus.

Thankfully, that student is okay and now he's sharing his story, warning others not to make the same mistake he did.

U of M student hit by car while riding scooter: ‘It was not a good idea’

Shocking security camera video shows the moment a University of Minnesota freshman is hit by a car while riding a scooter through an intersection on campus.

David Smith says he was riding his Lime scooter, crossing the intersection diagonally at University and 17th avenues, right across from his dorm, when a passing car hit him. Just before the collision, Smith was able to jump from the scooter but the impact of the crash still sent him flying. Thankfully, he survived the incident.

"Maybe if I didn’t get off of that scooter or if the car hit me in a slightly different way, I probably wouldn’t be here to do this interview today," Smith said.

Smith is feeling grateful that the video ends with him getting back on his feet.

"I just really thank god that I’m alive because that situation could have been much worse," he said.

During his first month on campus, like many students, Smith was riding an electric scooter home from class. 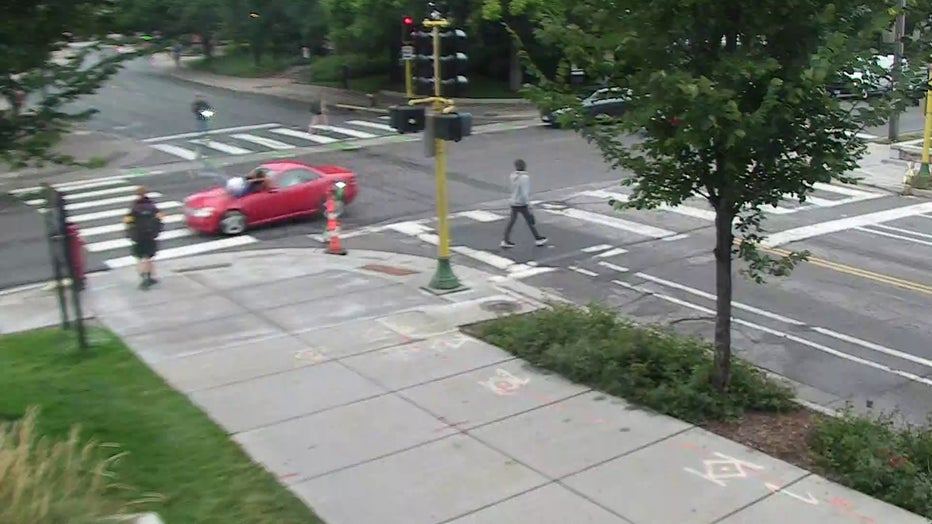 Security camera video shows David Smith getting walloped by a red sedan as he crossed the intersection diagonally. Something he admits was a bad idea. (University of Minnesota)

"I was coming down this road on the Lime scooter and I was thinking 'oh okay the cars aren’t going very fast,'" he explained. "Maybe I can just turn all the way right into this sidewalk right here."

The video shows Smith going against traffic laws, cutting through the intersection.

"I was like 'Nah I think I can make it' and that was obviously the wrong choice and led to the impact," Smith explained.

Somehow, Smith walked away from the accident with just a few bumps and bruises.

"I didn’t end up with anything serious," he said. "I had a little bruise right there. Put a little Band-Aid on it."

A few days later, he asked U of M Police for the video they had of the accident, captured on a nearby security camera. He posted it online and it quickly became a social media sensation.

"It’s just really entertaining to me honestly," he said.

But, in all seriousness, Smith is warning others to avoid the mistakes he made and obey traffic laws.

"It was not a good idea," Smith said.

It ended up being a humbling experience for him and a reason to stay off the scooters.

"I feel like God probably has bigger things for me to do especially if I survived something like that," Smith said. "Right now, I’m just -- I’m done with the scooters."

U of M Police were not available to talk to us for this story. Neither the driver nor the student were ticketed for any of this. U of M campus policy says scooters need to stay off the sidewalk and follow traffic laws just like a car or bike.