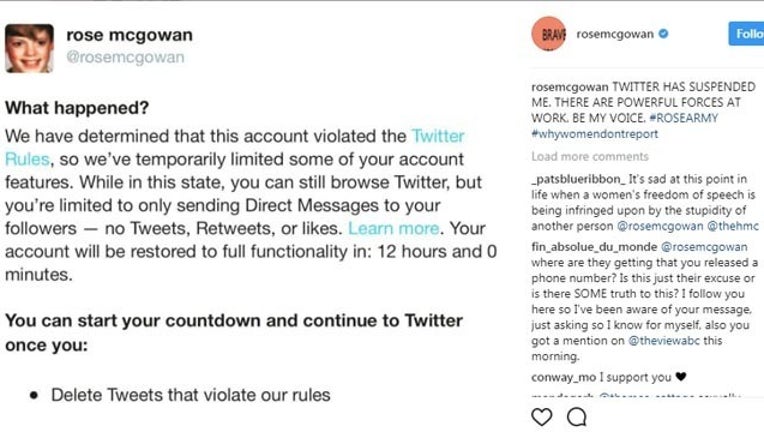 NEW YORK (AP) - Twitter on Thursday restored Rose McGowan's account after temporarily suspending it and causing an outcry it had muted one of the central figures in the allegations against Harvey Weinstein.

The episode, Twitter said Thursday, was because McGowan tweeted a private phone number, a practice it said violated its service terms. The company said it will "be clearer about these policies and decisions in the future."

McGowan's suspension caused an enormous backlash on social media, with many criticizing Twitter for a move that would silence an alleged victim of sexual harassment by Harvey Weinstein. Jessica Chastain and Anthony Bourdain were among those who questioned Twitter's action.

On her Instagram account, McGowan announced her suspension late Wednesday, warning that "there are powerful forces at work."

"Be my voice," wrote McGowan.

McGowan has been among the most vocal in Hollywood about sexual abuse in the industry. The New York Times earlier reported that McGowan was among the numerous women sexually harassed by Weinstein, who paid McGowan a financial settlement in 1997. That settlement included provisions about speaking about the case in the future.

While McGowan has avoided addressing her past with Weinstein directly, she has often seemingly referenced it. She last year said that she had been raped by a "studio head." After the New Yorker expose ran Tuesday, which included the report that Weinstein had allegedly sexually assaulted three women, McGowan tweeted "now I am allowed to say rapist."

McGowan also recently called Ben Affleck "a liar" on Twitter and suggested the actor knew about Weinstein's conduct. Representatives for Affleck haven't responded to messages regarding that allegation.