SUWANEE, Ga. - A truck driver experiencing a medical emergency crashed into a newly built Suwanee shopping complex Monday. The owners of that building said they just moved into it this week.

The couple who owns the complex built it from the ground up and said they were excited to start a new chapter in their jewelry business, but now they said they're stunned their storefront was a truck's final stop.

This year alone, they were the victims of a smash and grab at their old jewelry store location in Forsyth County, the pandemic closed business for a while, and now they're picking up the pieced from what could have been a fatal accident. 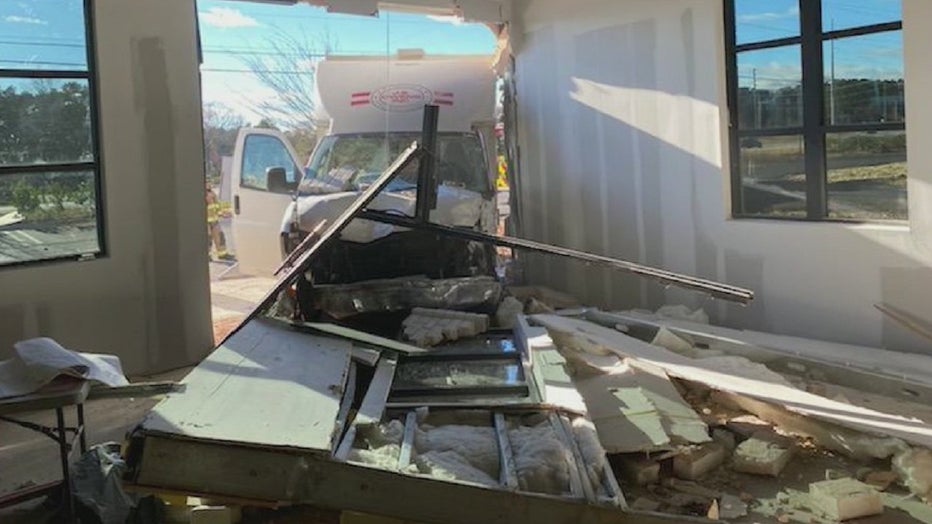 Thankfully, the truck narrowly missed the Simon D Jewelry store, but the owners said the damage to the other unit will be costly.

"There were clients in here and all of a sudden, we heard this big booming sound," one of the owners said. They both chose not to show their faces on camera.

"We just moved in and we’ve been open for business. This was about the third day," she said.

They said the crash happened around 3 o'clock Monday, while several clients were perusing items in the store.

Surveillance video shows the truck swerving all the way from the opposite side of Peachtree Parkway in Suwanee.

At that exact moment, there was no oncoming traffic and no one walking on the side of the road or nearby.

"Thank God no one got hurt, anyone in the parking lot or any client's cars," the owner said,

The owners said they spoke with the driver as he got out of the vehicle.

"He was choking on a cheeseburger had no control over it and I think the crash saved his life," she said.