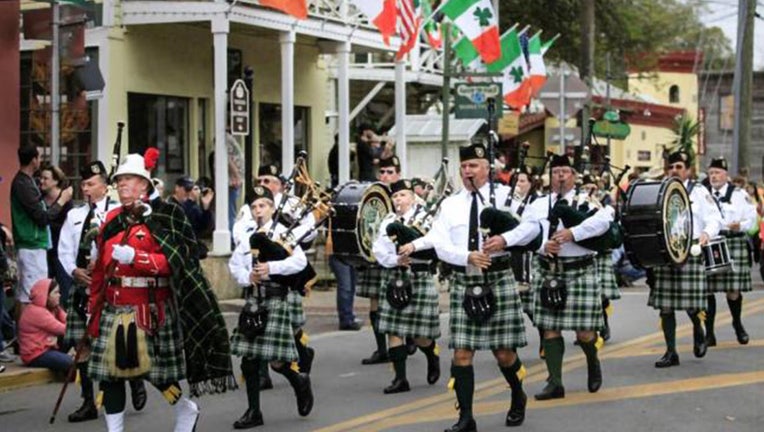 ST. AUGUSTINE, Fla. - It’s wasn’t Boston. It wasn’t Chicago. It was St. Augustine where the first parade to celebrate the feast of St. Patrick was held in the U.S., according to historians.

Officials in the Florida city even hold an annual parade to celebrate St. Patrick’s Day, and as a reminder that St. Augustine was the first to do so.

J. Michael Francis, a history professor at the University of South Florida, told The Washington Post he stumbled upon the discovery by accident, but learned the parade was held on March 17, 1601. At the time, there was a Spanish colony operating under the Irish vicar, whose name was Ricardo Artur.

He said it’s not unusual for artillery to be fired during times of celebrations and religious festivals. As he was looking over Spanish colonial records, including gun powder expenditures, he read about canons being fired to honor San Augustin, but almost missed the mention of another saint: Saint Patrick.

"At first, it didn’t register because it was so unexpected," Francis told the Post. "Then I thought, wait a second, they had a St. Patrick’s Day celebration in St. Augustine in 1600?"

Another entry showed in the following year, St. Augustine held a parade.

In a PBS documentary, "Secrets of Spanish Florida," they note there were at least two Irish residents in St. Augustine at the time. One of them being Ricardo Artur, a parish priest, and likely the responsible party for the celebration of Saint Patrick.

"When Arthur disappears from the historical records, so too do the references to the Irish saint, and soon thereafter, the memory of the St. Patrick’s Day celebrations and processions began to fade from public memory," according to PBS.

It wouldn’t be until more than a century later when Boston held its first St. Patrick's Day in 1737. New York City held its parade in 1762.